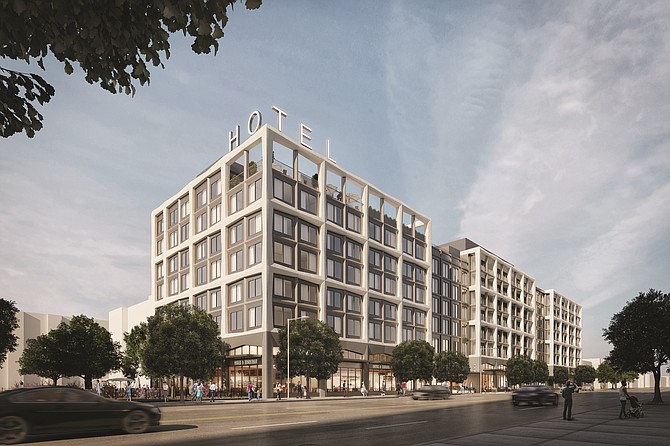 CGI Strategies — which is developing several major projects in L.A., including 639 S. La Brea — is also looking to invest in distressed opportunities.

“We are actively looking to continue to grow in Southern California, the Bay Area and Seattle,” said Daniel Nagel, the company’s chief financial officer.

“We are not feeling a tremendous pressure on our portfolio because we have so much weighted to multifamily,” he added.

This position, Nagel explained, will allow the company to be “aggressive and find opportunities.”

Of course, Decron isn’t the only company sensing buying opportunities in a distressed market.

Chris Rising, chief executive of Rising Realty, said the company was looking to buy assets and to expand its third-party business around property management.

“At the expense of sounding like we’re trying to be opportunistic, because we’re not, the reality is people are confused on how we are going to bring people back to work and what we are going to do,” Rising said of the company’s property management growth. Rising Realty already works with 2 million square feet of third-party properties, which he expects to grow. 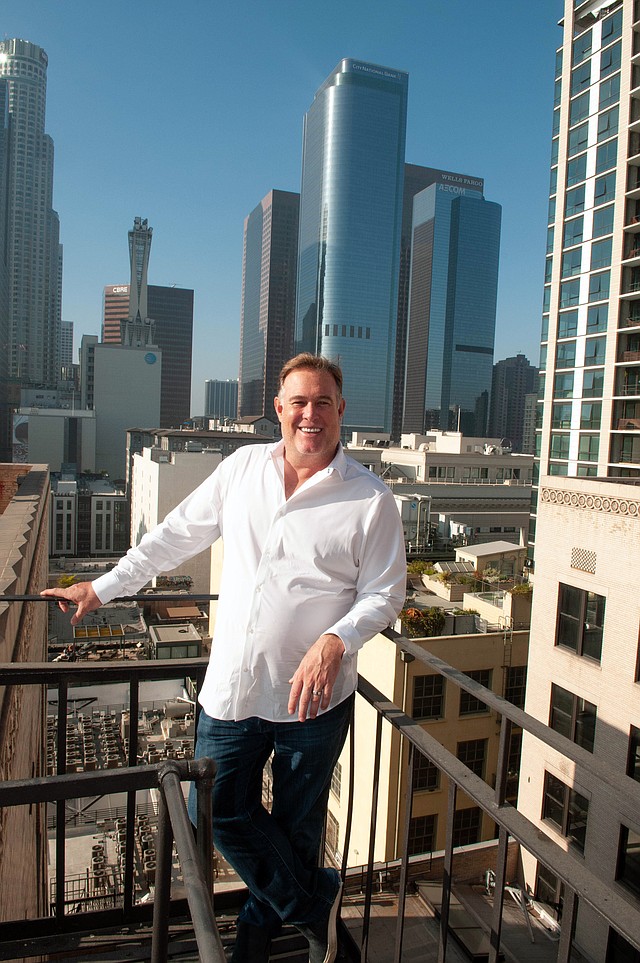 As for acquisitions, Rising expects some good opportunities.

“There will be a mismatch in pricing, and that will create opportunity for us,” he said.

Many of the companies eyeing investments today are drawing on their experiences from the Great Recession, when they found ways to turn the financial crisis to their advantage.

“This is returning to our roots. We started out by buying distressed opportunities,” said Reuben Berman, founder of Entrada Partners.

Today, Berman added, Entrada is looking at buying defaulting loans and unsold properties that were on the market before the pandemic “with a pricing adjustment post-Covid.”

The company has a $300 million portfolio, largely in Texas. Berman said Covid-driven market dislocation is creating “opportunities across the country, and we are interested in areas outside of Texas.”

“The dislocation is so widespread it’s almost like the entire country’s for sale right now. The opportunities are everywhere,” he added.

Berman said one of the biggest challenges is making sure not to buy too soon, before prices bottom out.

So far, he said, prices are down about 5% to 10%, but buyers want a 10% to 20% reduction in multifamily, industrial and office properties, and even more for retail and hotel properties.

Vista Investment Group was founded in 2008. The company started out buying multifamily assets on the West Coast before adding office buildings as well. It now has roughly 2,000 apartment units and 2 million square feet of office space, focusing on value-add acquisitions.

“We are still very much open for business. We are looking opportunistically at new acquisitions. We are really being targeted at what we want to spend time on right now,” Vista President Jonathan Barach said.

Barach added that his company is looking at unique situations such as properties that fell out of escrow or have a major tenant not paying rent.

“We think this might be an opportunity for us to grow into a new market or new markets. At this time, we are in all the core markets along the West Coast,” he said.

Barach added that Vista could expand its reach into Salt Lake City or Denver.

“Now that we think we have a better grasp than we had in mid-March or early April, we are close on a number of opportunities on the commercial side and have a couple offers out in order to put some deals in escrow. We hope those opportunities will continue to present themselves as we get into the summer and fall,” he said.

Some companies have recently raised funds that will be used for new investments during this time.

MJW Investments has created a $500 million fund to invest in value-add multifamily and student housing, joint ventures, and distressed debt and note sales.

Mark Weinstein, MJW’s founder and president, said the company was “making lots of offers, but nothing is really in escrow.”

“We’re finding there’s a lack of realization on part of the sellers that their income stream is diminishing, rents are declining and vacancies are increasing,” he said.

The company is working on buying notes as well. Some partners in deals that are undercapitalized have reached out to him, allowing the company to become a partner in these properties.

Weinstein said the company thinks “income is going to go down, so we’re evaluating income streams based on what we think the future is going to look like.”

He expects rents to dip about 10%, so he wants a reduction of 10% to 20% from precoronavirus prices.

“You need a discount for the risk you are going to take,” Weinstein said.

Once sellers adjust prices to appropriate levels, he added, deals would likely start to move faster.

For student housing, Weinstein said some other states have announced that they would have classes in the fall where some schools in California are less certain. That makes it “trickier to buy in California.”

In the next few months, he said the company would focus outside of California where “there’s more predictability.”

Stockdale Capital Partners has also raised a fund. It has secured a $550 million real estate opportunity fund to look at new opportunities.

“We are gearing up to really get aggressive and deploy the fund that we raised,” Managing Director Dan Michaels said.

The fund gives Stockdale an advantage, Michaels said. The company has cash on hand that it can deploy quickly. And it will likely raise more money.

“It’s in the billions, what we are seeking to deploy in the next couple of years,” he said.

For some companies, opportunities may come from unlikely sources, mainly retail and hotel properties.

Michaels and Decron’s Nagel agreed that the sector could be interesting.

“Today we would consider a retail opportunity or even a hotel opportunity,” Nagel said. “The opportunity that might come up in retail or hotels will be in a more distressed nature where we can enter into the asset at a better price.”

Before, he said, retail real estate wasn’t priced appropriately for the risks it brings while there were more risk-adjusted returns to be made in multifamily.

“With retail getting hit, we could find opportunities there in the right location,” Nagel said. Decron would like retail assets prime for redevelopment, such as mixed-use or multifamily buildings that could operate as retail in the meantime. For hotels, the company would repurpose the assets to other uses such as student housing.

Sandy Sigal, chief executive and president of Woodland Hills-based Newmark Merrill Cos. Inc., said he was “spending the first half of the day on defense, and the second half of our day on where is the opportunity.”

NewMark Merrill is one of the region’s largest shopping center developers and owners.

Sigal said the company was focused on neighborhood assets, expecting that many people are going to want to stay closer to where they live and work.

He added that the company was particularly interested in the San Fernando Valley, Norwalk, Inglewood and other community-oriented areas.

Currently, Sigal said, there are fewer buyers of retail properties leading to some opportunities.

CGI Strategies, which is very active in L.A., is also interested in hotels.

“Usually the opportunity comes in places that are getting hurt. Right now, it’s the sector in the market that is getting hit the worst,” said CGI founder and Chief Executive Gidi Cohen.

Cohen believes there will be a return on investment when the industry comes back in two to three years.

The company is currently working on three hotel deals.

Industrial, office and multifamily properties are viewed by many as safer assets.

Cohen said the company is interested in buying, looking at location, replacement costs and the value of assets now and in the future.

“The L.A. market right now is tougher because of a tremendous amount of political uncertainty,” he said, adding that the company was very interested in the Southeast.

And Rising said his company, which will still do office properties, might expand into other sectors as well.

“You will see us getting into some multifamily and industrial more than we have in the past,” he said.

“We do see a pricing correction on multifamily, but we think demand is there to keep occupancy up, even if rents drop a little bit,” he said.

Barach added that while the company loves multifamily properties, he does not foresee as many distressed multifamily assets compared with other asset types.

“The activity level is based on the food group. If you are in hotel or retail looking for distress, it might be the early days. If you are looking for industrial, we’ve seen in the last few weeks prices improve,” he said, adding that industrial would likely be a prized asset class.

He also thinks there may be some move away from manufacturing overseas which, in addition to ecommerce, could mean more industrial demand.

Bill Fishel, senior managing director and co-head of the Los Angeles office of Jones Lang LaSalle Inc. Capital Markets, said that fundamentally, what investors are looking for has not changed due to Covid-19.

“On the core to core-plus end of the investment spectrum, investors remain focused on asset classes and properties with strong underlying credit or end-user demand dynamics,” Fishel said. “For value-added to opportunistic investors, the focus remains on effectuating operationally intensive business plans wherein properties are developed or repositioned into stabilized buildings that appeal directly to those same cash-flow oriented core to core-plus investors,” he said in a statement.