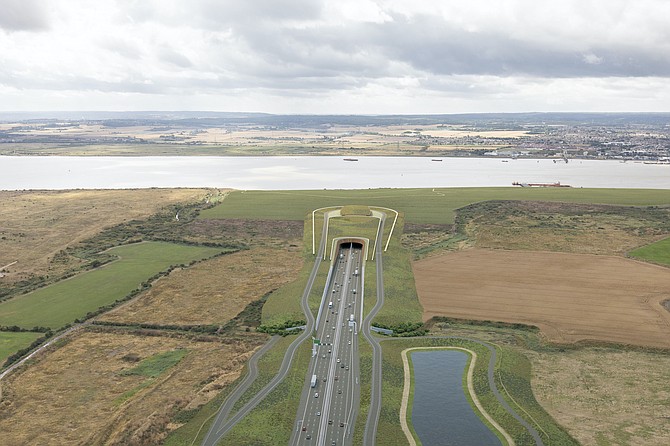 According to AECOM’s announcement, the ground and groundwater investigations that the firm will oversee will provide key information for better estimates of costs and time needed to complete this major infrastructure project.

The ground investigations will also allow for recommendations to reduce safety and construction risks with the project.

AECOM did not release the monetary value of its contract with Highways England, the government agency overseeing the project.

The Lower Thames Crossing project is one of the British government’s top 40 infrastructure projects. Its main feature is a 7-mile, four-lane highway tunnel — the longest in Britain — under the Thames River.

The overall aim is to increase road capacity and shorten travel times in the Thames Estuary region, which has long been underserved with major highways. The few roads that do cross the Thames in the area are often congested, leading to delivery and commuter delays.

The project is slated for completion in 2027. But minor route and design changes are still being considered, which could push the completion date back to 2028.

“We are excited to continue building on our partnership with Highways England and its important work to support economic growth through dependable, durable and safe major roads,” Lara Poloni, AECOM’s chief executive for the Europe, Middle East and Africa regions, said in the announcement.

AECOM started ground investigation work on the Lower Thames Crossing highway tunnel project in 2017. A major component of the ground assessment to date has been soil tests under the Thames River to provide an accurate picture of the soil conditions and risks to tunneling under the river.

The company has already started work on the Phase 3 contract, with ground investigation work at more than 550 locations in Kent and Essex counties in Southeast England.

“Ground investigations are crucial in helping mitigate potential construction problems down the line and ensuring that all the engineering needed to build the tunnel and associated roads is as best planned as possible,” Patrick Cox, AECOM lead executive for the Lower Thames Crossing Ground Investigations project, said in the announcement.

So far, according to an email response from AECOM spokesman Brendan Ranson-Walsh, there have been no delays because of Covid-19. The announcement said the AECOM-led ground investigations team has taken steps at each of the 550 ground testing locations to protect staff, industry colleagues and the general public though the announcement did not specify what efforts have been taken.

This project is one of the first major contracts for AECOM since the company announced last month that Troy Rudd will be its next chief executive, effective Oct. 1, succeeding Michael Burke. Also announced was the promotion of Poloni to the role of companywide president.