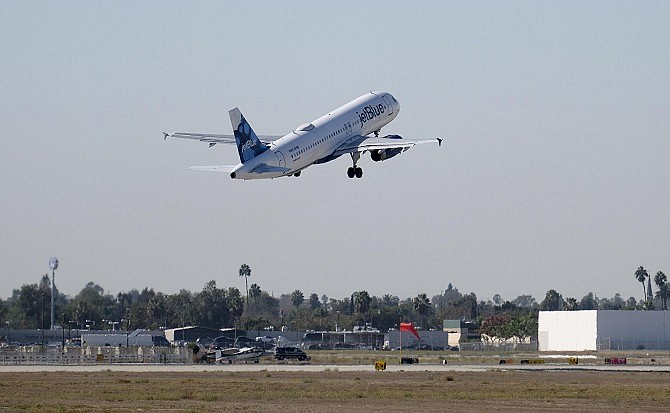 A Jet Blue aircraft departs from Long Beach Airport. JetBlue Airways Corp. has cut a third of its flights out of Long Beach. Photo by Ringo Chiu.

The passenger traffic picture was mixed for 2019 at three of the Los Angeles region’s airports.

That was the smallest increase at LAX since the Great Recession.

Passenger traffic at Long Beach Airport fell 7.8% last year to just under 3.6 million, despite increases in November and December, according to data released Jan. 28.

Hollywood Burbank Airport had yet to report December and full-year figures as of Jan. 29. For the first 11 months of 2019, Burbank registered a 13% increase in passenger traffic as more than 5.4 million passengers went through its gates.

The slowdown was across the board, LAX officials said.

International traffic dropped 1.4% at LAX to 25.7 million when compared to 2018. Airport officials had told the Business Journal in October that the drop in international travel was due to a more costly dollar and cutbacks in flights to saturated markets, such as Mexico.

Airport officials in October attributed the drop partially to flight cancellations due to the grounding of Boeing Co.’s 737 MAX planes in late March. Two of the planes had crashed, killing all aboard, in Indonesia and Ethiopia.

The biggest jump in December came in domestic passenger traffic, which rose 4.7% to 5.35 million. But that was largely due to a fluke of the calendar.

Airport officials blamed trade tensions between the United States and China for the drop in 2019, which saw the scope of trade tariffs widened.

With 5.6 million passengers last year, Ontario International Airport’s 9.1% year-over-year gain was its biggest since the start of the Great Recession in 2008.

That year 6.2 million passengers went through the gates at Ontario.

These rapid growth rates reflect an aggressive push by the Ontario International Airport Authority — which took control of the airport from Los Angeles in November 2016 — to market the airport both domestically and internationally.

In March 2018, China Airlines began the first transoceanic international flight between Ontario and Taiwan’s Taipei airport; a total of 175,000 passengers took that flight during its first 12 months.

Domestic passenger traffic at Ontario rose 8% during 2019 to reach 5.3 million.

Air cargo at Ontario rose 5.1% to 760,000 tons, in large part due to the continued rise of the Inland Empire as a major warehouse and distribution hub.

At Long Beach Airport, passenger traffic fell 7.8% last year to 3.58 million, according to data from the city, which administers the airport.

A drop had been expected because in late 2018 New York-based JetBlue Airways Corp., the dominant carrier at Long Beach, cut about a third of its flights after its bid to start international service was derailed a year earlier.

Throughout 2019, other carriers — chiefly Dallas-based Southwest Airlines Co. – began to pick up some of JetBlue’s flight slots at Long Beach.

This was reflected in the November and December passenger numbers, which rose 5.2% and 7.9% respectively. December’s rise to nearly 322,000 was also aided by the late Thanksgiving holiday.