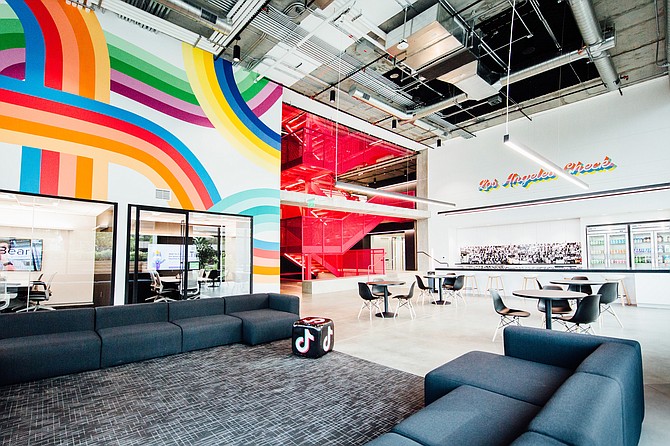 The interior of TikTok's office in Culver City.

Social media company TikTok, which has maintained a presence in the Los Angeles area since 2017, opened its first permanent office in Culver City on Jan. 22.

“While we are a global company, having a permanent office in L.A. speaks to our commitment to the U.S. market and deepens our bonds with the city, and the talent and companies, that call it home,” TikTok General Manager Vanessa Pappas said in a statement.

Pappas said TikTok will complete its first content creation studio at the office by this summer, and it will use the facility to attract new video creators to fuel its stream of short-form video content.

TikTok, which is owned by Beijing-based ByteDance, is a popular video-sharing website that launched in China in September 2016.

ByteDance is leasing additional property in Los Angeles; it signed a nearly 119,000-square-foot lease at 5800 Bristol Pkwy. in Culver City in October 2018, according to real estate agency Jones Lang Lasalle.

TikTok said it has more than 26 million users in the United States, about 60% between the ages of 16 and 24. The bulk of the company’s users are located in Asia.

Pappas said TikTok's U.S. team has more than 400 employees. She added that the new office “truly sits at the intersection of technology and entertainment, physically and figuratively.”