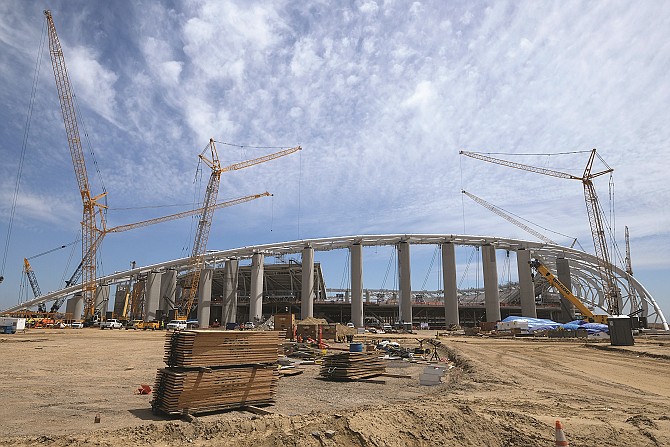 The future home of the Rams and the Chargers in Inglewood. Photo by Ringo Chiu.

The heart of L.A.’s 2020 sports business calendar will almost certainly be the July opening of SoFi Stadium at Hollywood Park in Inglewood, which comes just weeks before the Los Angeles Rams and Los Angeles Chargers kick off their National Football League seasons.

But don’t punt on other major happenings in the region.

In late March, Staples Center will host the West Regional semifinals and final of the NCAA men’s basketball tournament. The winner advances to the Final Four in Atlanta in early April.

On July 14, the Major League Baseball All-Star Game returns to Dodger Stadium for the first time since 1980. The 91st edition of the game coincides with a $100 million renovation at the stadium.

The project will include a new center field plaza, giving fans the ability to walk completely around the stadium for the first time since it was built in 1962.

The Los Angeles Sports and Entertainment Commission expects the All-Star Game to have a nearly $90 million economic impact on the city.

Two weeks later, on July 29, Major League Soccer’s 25th All-Star Game will take place at Banc of California Stadium. It’s just the second time the event has been staged in L.A. The first time was in 2003 in Carson, at the then-Home Depot Center (now Dignity Health Sports Park), home of the Los Angeles Galaxy.

Further afield, it’s expected that key members of the Los Angeles Olympic Organizing Committee and other local officials will venture to Tokyo in July and August as part of their preparations for the 2028 Summer Games, which will take place in Los Angeles, the city’s third time hosting the games.

Off the court or the field, officials and athletes from USC, UCLA, Loyola Marymount, Pepperdine and other local colleges could play prominent roles in California’s battle against the NCAA. In 2019, the state challenged the NCAA’s legal rights to own the name, image and likeness of college athletes. More than a dozen states have followed California’s lead and legal wrangling is anticipated in the coming year.