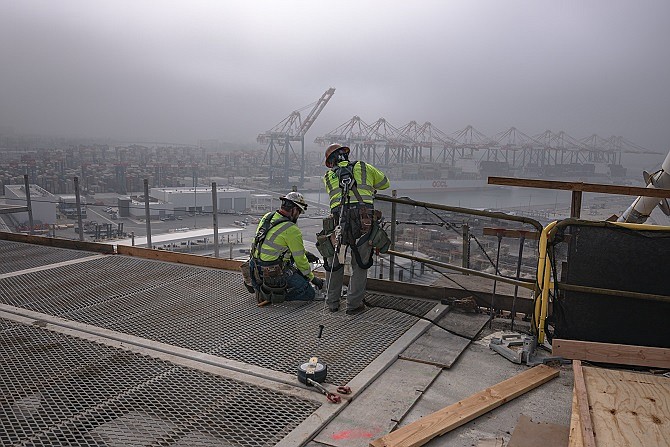 Construction workers on Gerald Desmond Bridge in the fall of 2019. Photo by Jonathan Alcorn

Not only is 2020 shaping up to be a momentous year for the completion of massive infrastructure projects in Los Angeles County, it also figures to be a year of transition at two major infrastructure entities.

Among the billion-dollar-plus projects scheduled to open this year: a football stadium for the Los Angeles Rams and Los Angeles Chargers in Inglewood; a $2.1 billion light rail line down Crenshaw Boulevard toward Los Angeles International Airport; the $1.6 billion northern portion of a new terminal behind the Tom Bradley International Terminal at LAX; and the $1.5 billion Gerald Desmond Replacement Bridge connecting the Port of Long Beach with local freeways.

The stadium, being developed at Inglewood’s Hollywood Park by Rams owner Stan Kroenke, will be the most expensive and, at 3.1 million square feet, the largest in the National Football League.

Kroenke’s development team has been mum about the price tag, but it’s been reported that the stadium and adjacent office, hotel, retail and residential development will cost $5 billion by the time of its planned completion in 2022.

The stadium is set to open in July with a concert by entertainer Taylor Swift; the Rams and Chargers will play their respective home openers in September.

The line will come within a mile of LAX at the Aviation/96th Street station where it will connect with the automated people mover project now under construction that will whisk passengers to and from the airport’s terminals.

The new Gerald Desmond Bridge will replace the original, which opened in 1968 and today handles nearly 15% of the nation’s truck-transported imported cargo. When complete, the replacement will be the nation’s second-tallest cable-stayed bridge, with its two towers reaching a height of 515 feet and a deck height of 205 feet.

Meanwhile, giant Century City infrastructure company AECOM is in the midst of a leadership transition. Current Chief Executive and Chairman Michael Burke, who built the company into a $20 billion behemoth through dozens of acquisitions, is scheduled to depart by March.

AECOM’s board will choose a new chief executive, and that person may be one of two new board members — veteran industry executives Robert Card and Jacqueline Hinman — the company added as part of its agreement with activist investor Starboard Value.

A leadership transition is also in the works at Los Angeles World Airports, the city agency that runs Los Angeles International and Van Nuys airports. Deborah Flint, who has served as chief executive since 2015 and has overseen the $14 billion makeover of LAX, is out, having taken the top post at Toronto’s Pearson Airport.

The agency’s No. 2 executive, Justin Erbacci, was named interim chief executive in mid-December; the city’s airport commission has begun a search for a permanent successor.