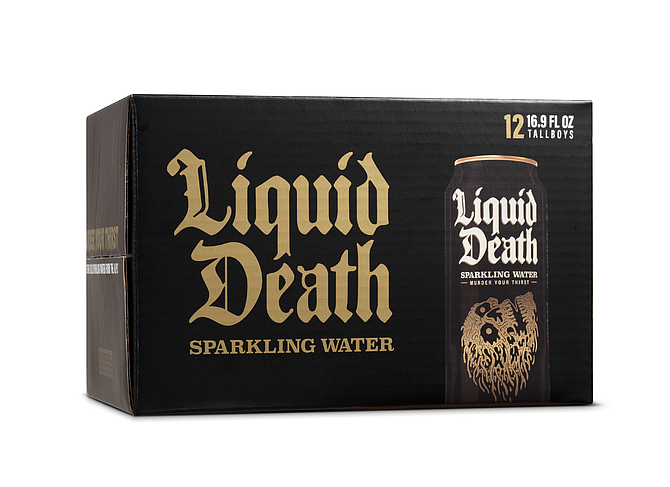 Canned water company Liquid Death is planning a push into brick and mortar.

Until now, the Santa Monica-based startup has been selling most of its tallboy cans of water — with a heavy metal design and the slogan, “Murder Your Thirst” — online. Its retail outlets include Los Angeles nightclubs, tattoo parlors and concert venues, according to company co-founder and Chief Executive Mike Cessario.

But Whole Foods Market has agreed to begin carrying the drink nationwide this month. And Cessario said Liquid Death plans to use its new funding to go after convenience stores and bars nationwide.

“We started doing some small testing (on brick-and-mortar sales) about seven months ago and had really great results,” he said, “so we decided to jump in.”

Online sales have been mostly through Amazon and the company’s own website.

“We’re looking at the brick-and-mortar to become the majority,” Cessario said, “probably by a longshot.”

Cessario said the brand’s aggressive tone emerged partly as a way to lampoon the marketing tactics of energy drink and alcohol companies attempting to appeal to youth markets. “We were looking at, ‘How do we one-up them?’” Cessario said. “People get that there is a tongue-in-cheek thing here.”

In addition to adding a heavy metal flair, Cessario said the brand’s name also reflects its eco-friendly roots and aspirations. “It’s a play on words for ‘death to plastic,’” he said.

The company markets its aluminum cans as a more sustainable alternative to plastic bottles. It also donates a portion of its sales to charities aimed at eliminating plastic waste and increasing accessibility to clean drinking water.

“At the end of the day, a brand is a vehicle to get somebody something,” he said. “You are seeing more people caring about what brands do, rather than just the product.”