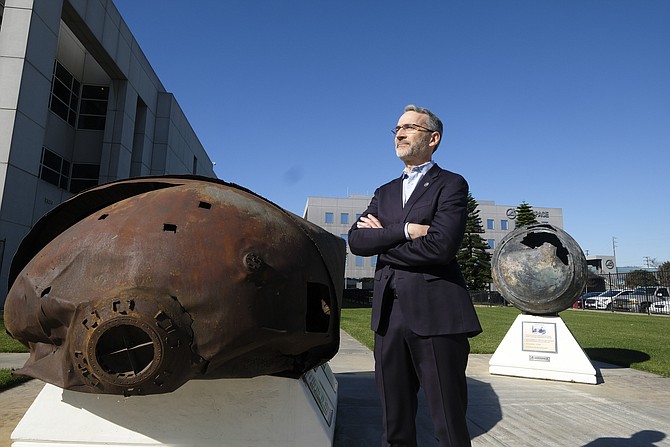 Steve Isakowitz, CEO of Aerospace Corp., was inspired by watching Neil Armstrong walk on the moon. Photo by Ringo Chiu.

Aerospace Corp. President and Chief Executive Steve Isakowitz says he has dreamed of space since he watched Neil Armstrong set foot on the moon in 1969.

Over the course of a career that spans nearly four decades in both the public and private sectors, Isakowitz has nurtured and furthered those dreams.

The MIT graduate, who earned his bachelor’s degree in 1983 and master’s in 1984, spent 10 years advising on aerospace funding in the White House Office of Management and Budget before helping Richard Branson start a private launch company in Long Beach called Virgin Orbit. Isakowitz worked in the administrations of Presidents George H.W. Bush, Bill Clinton and George W. Bush.

In 2016, Isakowitz took over leadership at Aerospace Corp. Founded in 1960, the nonprofit is the nation’s only federally funded research and development center focused on aerospace. It troubleshoots the government’s space systems and defense programs and helps for-profit aerospace companies advance their technologies.

Aerospace Corp.’s sprawling El Segundo campus is adjacent to the Los Angeles Air Force Base, which serves as the headquarters of the Space and Missile Systems Center for the new U.S. Space Force.

Aerospace Corp.’s team of more than 4,000 scientists and engineers design technologies for space. They’re currently focused on small, cube satellites that combine many functions in a small box.

Some Aerospace Corp. engineers spend their days in a stuffy room overseeing industrial 3D printers that make metal rocket parts. Others operate CT scanners the size of an elevator to analyze aerospace hardware for flaws that are invisible to the naked eye.

“I always knew that I loved the space program,” Isakowitz said. “It’s not just big governments with big programs anymore. There’s an opportunity for all of us.”

Why does L.A. continue to be a hub for aerospace?

When Richard Branson and I knew we wanted to start a small rocket company, he asked me where (we should) go. And if I had followed what many of the companies were doing at the time, I would have said “Let’s go to Texas.” There were states that were aggressively pushing it, saying, “We don’t have the same environmental restrictions, the quality of life is cheaper here, you can test rockets here in favorable tax conditions.”

What made you choose the L.A. area for Virgin Orbit?

In the end, I decided to put it in Long Beach because we had to move fast, and I needed the ability to get the quality workforce we needed to pull this off. There were more costs to being here, but there was also the ability to draw from these other companies and assemble a team. 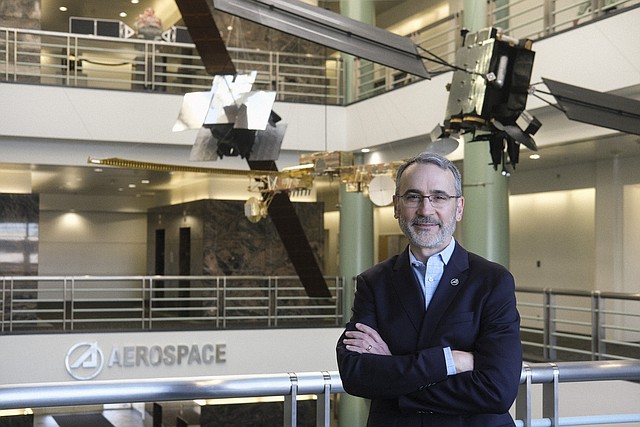 Tell us about Aerospace Corp.’s work with the industry here.

We’ve developed a relationship with TechCrunch. They’re excited about what’s going on in space, and we’re going to have an event here in L.A. in June of this year. We (also) have the Space Ventures Coalition (where) we’re teaming up with JPL, the Rand Corp., and universities to help develop the (funding) ecosystem and say, “We have a lot right here that should be able to draw in innovation in this area.”

What were your goals when you were starting your aerospace career?

At MIT, what I had a great hope for was that this notion of democratization of space might occur because by that time, NASA had decided (they) were done with the moon, and I figured it would take others to do it. In my last year at MIT, I took a course at the business school, and I said, “I’m going to come up with something we can put in space and start my own company.” But to put a satellite in space, I’d need to start with a couple hundred million dollars. At that point, I realized it was impossible; I’d need to go on a different journey.

And how did that change your path?

What followed were opportunities with the government and big traditional aerospace companies, which I (worked with) for a number of years, working on launch vehicle programs.

How did the Challenger disaster in 1986 reshape the aerospace industry?

Right after the Challenger accident, (President Ronald Reagan) decided satellites wouldn’t be flown on the space shuttle, and so there was an opportunity for commercial companies to go do it. But no one was building their own rockets, and they were using preexisting rockets. I worked then at Lockheed Martin on a Titan vehicle, and it didn’t work out for us commercially. I remember being frustrated, saying, “The government set us up to fail.” And I thought, “I’ve got to get into government and figure out what’s behind this.”

And that led you to Washington.

I wound up at the White House at the Office of Management and Budget. This is the arm responsible for working with agencies, setting priorities, and I became a branch chief for science and space programs. I did that for 10 years, and from there I segued into NASA. I was there at the time of the Columbia accident, with the then-deputy CFO, and we were trying to figure out what came next for NASA, (if) we should build another space shuttle.

What did you come up with?

We came back with something that led to President Bush announcing the Vision for Space Exploration, which was, “It’s time for us to continue the journey that NASA started in the ’60s. We have to go back to the moon and onto Mars.” Instead of the government writing a blank check, they said “Do it affordably and do it so we stay.”

How did private firms get so involved in the national space program?

(The government) had to start thinking about how we partner with industry in a way that we can rely on industry to start making some of the investment to get us there. That led to programs we see today. NASA has programs called Commercial Cargo and Commercial Crew, which is what we’ll see hopefully later this year with SpaceX and Boeing using the Dragon rocket to take people to space. To me, that’s really exciting.

Tell us about working with Branson.

Richard Branson hired me into Virgin and Virgin Galactic. Richard is the epitome — as is Elon (Musk) and Jeff Bezos — of this democratization of trying to get out there. I helped (Virgin) work on taking people to the edge of space and back, and then helped start building a small rocket that can carry small satellites into space. And right now, that’s the big rage in space: Things are starting to miniaturize.

(During my time in) college … I had a (satellite launch) business plan that cost $200 million. You could do it today for less than $1 million.

Do you feel we’re getting to that goal of space being more accessible?

We are there. Earlier in the 2010s, it was the billionaires who really moved things and were starting to build. Elon introduced a fleet of rockets, through the Falcon, that turned out to be significantly cheaper than we’ve seen before. And (with) the whole miniaturization of satellites and the incredible improvement of sensor technology, you no longer need a school bus-sized satellite. You can build these things to the size of a toaster.

How has that changed the game?

Some of what we can do (at Aerospace Corp.), compared to satellites that cost 100 times more in the past, is staggering. With the cost of launch and satellites going down, there’s this idea you can pack a whole lot of these small satellites onto bigger rockets and get a really cheap ride into orbit. So I won’t say it’s airline-type operations, but we’re getting to a point now (that) there’s a whole new industry of these small launch vehicle companies springing up.

How do you see Aerospace Corp.’s role evolving?

We work with a great many of (the local aerospace companies). When they’re trying to solve hard technical problems, we’re the ones who can go in there and get down to more of the science because we have a lot of PhDs here. Sometimes it’s also just introductions to the government. We try to help introduce them. And we provide that technical advice to the government itself. 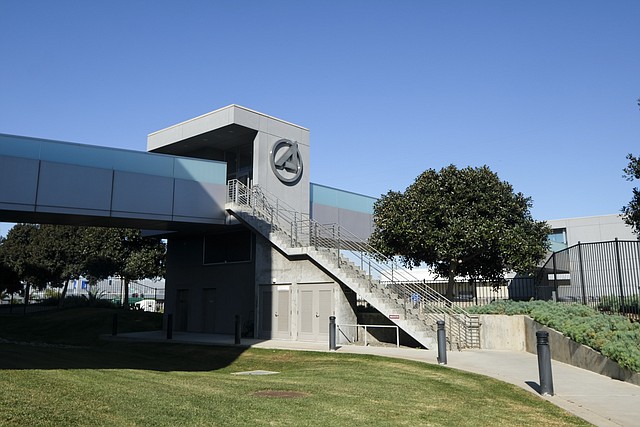 Aerospace Corp.'s offices sit next to the Los Angeles Air Force Base.

What are some of the standout aerospace companies in L.A. that Aerospace Corp. has worked with or would like to work with?

In a short few miles, you’ve got six small rocket companies now, and each one of them is crazy and audacious in their own way.

There’s one called ABL Space Systems. They’re building a small rocket that will be highly compartmentalized, so it’s easy to move and assemble anywhere.

Also, a couple miles from here is Relativity Space. They can 3D-print an entire designer rocket. And down the street (from us) is, of course, SpaceX.

And if you go further down in Long Beach, you have Virgin Orbit and a company called SpinLaunch. And RocketLab is moving from New Zealand to Huntington Beach. They’ve proved you can build small vehicles at a fraction of the cost. In the past, if you wanted to fly something on a small rocket, it would cost you $40 million to $50 million. You can now get that for 10 times less on one of these small rockets.

This, to me, is the tipping point of entrepreneurship: Everyone is coming in with their idea. And let the best idea win.