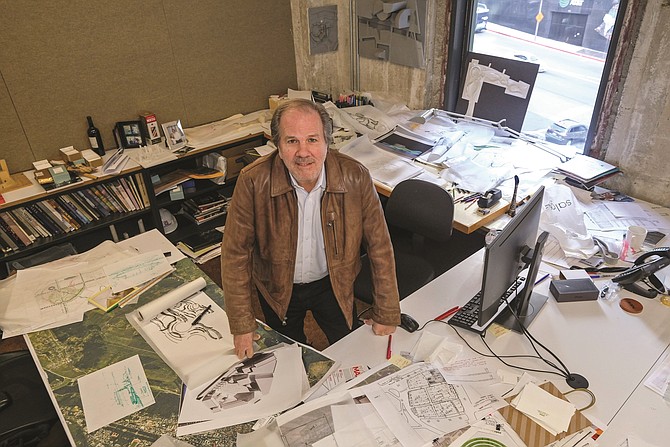 Jerde Partnership believes it can go big and go home.

The downtown-based design and architecture firm, which has earned acclaim for a long list of massive projects overseas, is equally interested in putting its mark on smaller efforts around Los Angeles.

Jerde Chief Executive Paul Martinkovic said his company, which initially gained international attention for its work on the 1984 Summer Olympics in Los Angeles, wanted “to focus on coming back to the U.S.”

Today, Jerde Chairman and Design Director John Simones said, the firm does 70% of its work overseas and 30% locally.

“A lot of people know us for doing these huge projects,” Simones said, “but we also have lots of fun with some of the smaller community projects.”

One example is Pacific City, a $135 million retail development in Huntington Beach. The roughly 191,000-square-foot open-air center is much smaller than the 1 million-plus-square-foot developments Jerde has designed in other countries.

The firm is also working on an overhaul of the Howard Hughes Center in Westchester with the goal of getting people into the rest of the center and not just the theaters. 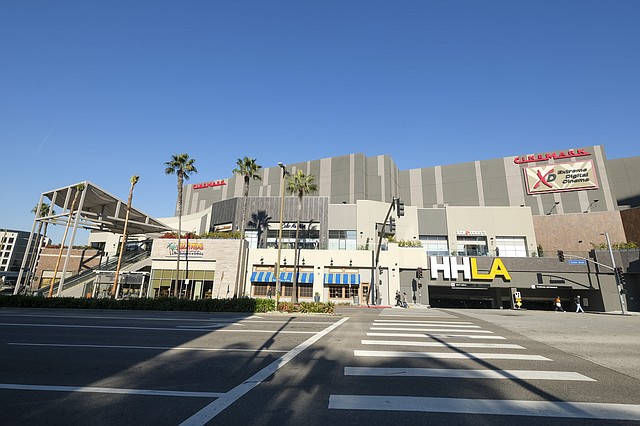 Jerde is working on the Howard Hughes Center redesign.

One of the company’s highest-profile local projects is a renovation of the area around the Rose Bowl in Pasadena. Jerde is still in the early stages of the work, including improvements to parking as well as additional projects.

Jerde estimates that more than 1 billion people visit the company’s projects every year.

Closer to home, the firm is known for its makeover of Santa Monica Place in 2010 and the design of the Bellagio Hotel and Casino in Las Vegas, which opened in 1998.

Jerde was founded in 1977 by the late Jon Jerde. After a long tenure in Venice Beach, the firm moved downtown in 2018.

“We were looking in different areas then decided to move downtown,” Martinkovic said. “We wanted to be close to the political center, and it’s where all the developers are.”

Jerde, which also has offices in South Korea and China, has 110 employees worldwide.

Jerde has been in an expansion mode of late. In 2019, the firm absorbed Chinatown-based landscape and architecture design firm Superjacent. Terms of the deal were not disclosed.

Christopher Torres, design principal for Superjacent, started the studio in 2015. He said he spoke to many firms about potential partnerships before being folded into Jerde, which he called “an opportunity to push deeper.”

Torres added that his landscaping team would likely be at 12 people next year and would eventually be capped at 20.

Another benefit of the Jerde merger, he said, is that Superjacent is becoming more multidisciplinary and working in new areas.

Martinkovic and Simones said Jerde was also looking to add an interiors firm to round out the company’s offerings.

“The market is demanding that architects get very involved in the early stages,” Martinkovic said, who added that Jerde is hoping to expand the UrbanCore group.

“We can take what their assets are and put a physical layer on it with the architecture department,” she said.

Oka added that UrbanCore is looking at “communities and people” when it works on projects for private clients who are looking to attract the public.

“When we create a destination, we are creating a place that people are willing to give up their time to,” Oka said.

Simones said Jerde is “looking to grow more laterally, extending more offerings” but has “no ambition to grow to 1,000 people.”

“This niche of about 100 to 120 people is where we feel very comfortable. We look at ourselves as a boutique firm,” he added.

Tammy McKerrow, one of the Jerde architects behind Pacific City and a senior design principal, has been with the firm since 1986.

With retail projects now, she said, the challenge is getting people out of the world of ecommerce and into public spaces.

To do that, she said, you have to pay “more attention to doing everything you can to strengthen the location and the relationship between tenants.”

This means moving away from retail with traditional inline shops, creating more flow and movement in centers, and “programming the open spaces that are encouraging cross traffic.”

Shops themselves, she said, are smaller.

Martinkovic added that a lot of malls will be reconfigured and new elements, like esports arenas, will be added as “clients are looking for creative ideas to create a competitive advantage.”

He said Jerde is getting involved in projects much sooner and giving developers ideas about how to be unique.

Simones added that, while “a lot of people know Jerde as retail,” the group is also looking at more mixed-use projects, a lot of which will be focused around transit stops.

“What we learned overseas is how to capitalize on people using Metro,” Simones said. “They are a huge catalyst for the surrounding areas.”

Simones also expects Jerde will work on more health, wellness and medical projects going forward and even do senior housing.

Jerde will still do retail, though and — Simones said he looks at it as “the glue that holds everything together” —and will focus its retail on experiences.