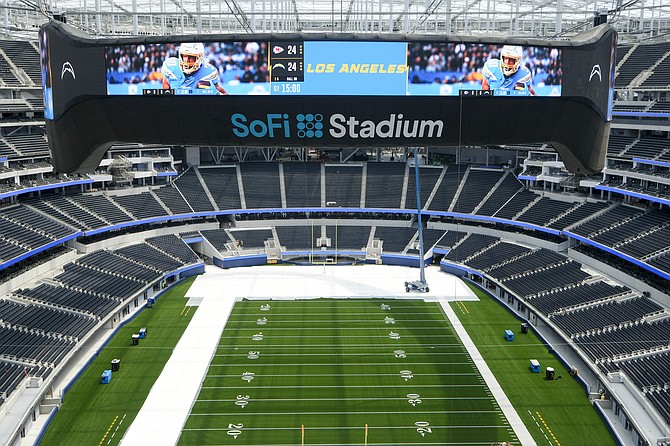 At 3.1 million square feet, SoFi stadium is the largest in the NFL. Its videoboard is larger than the playing field. Photo by Ringo Chiu.

SoFi Stadium, the largest stadium built in Los Angeles County in nearly a century, officially arrives this month after years of development.

The massive sports and entertainment venue — the new home for the Los Angeles Rams and the Los Angeles Chargers — is set to receive its certificate of occupancy from the city of Inglewood this week.

At an estimated cost of $5 billion, it’s the most expensive stadium ever built. 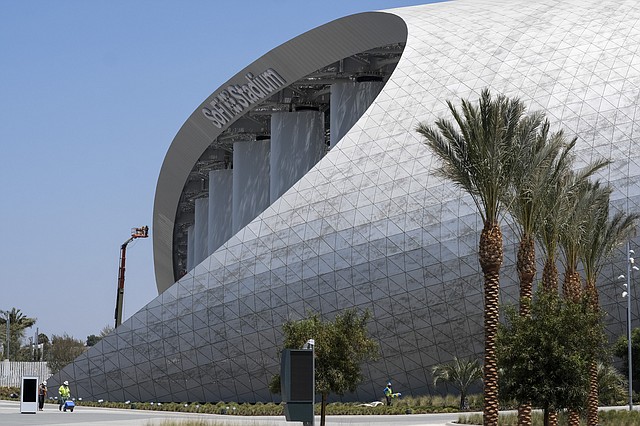 Constructions costs for SoFi Stadium and Hollywood Park are estimated at $5 billion, including an adjoining outdoor plaza and a 6,000-seat performance theater, all under one canopy.

And while the first event at SoFi Stadium is now scheduled for mid-September, due to the Covid-19 pandemic, it will likely be next year before fans can take to the newly built stands.

The venue, developed by billionaire Rams owner Stan Kroenke, promises to be much more than a home field for the two National Football League teams.

It will also host major sporting events such as the 2022 Super Bowl, college football’s 2023 national championship game, possibly the 2026 FIFA World Cup, and half of the opening and closing ceremonies of the 2028 Summer Olympic Games (sharing those ceremonies with the Los Angeles Memorial Coliseum).

SoFi Stadium will also play host — eventually — to a steady stream of entertainment events, including at some point the Taylor Swift concert that was originally scheduled to open the venue on July 24 but was scrapped due to the pandemic.

“The opening of the stadium is a significant milestone in Stan Kroenke’s delivery of his commitment to create a world-class sports and entertainment event venue in the heart of Los Angeles,” said Jason Gannon, managing director for SoFi Stadium and Hollywood Park.

The stadium is intended as a centerpiece for a massive entertainment, retail, commercial and residential development on the nearly 300 acres owned by Kroenke at the former site of Hollywood Park racetrack.

The first phase of that development — including an office tower that will house the headquarters of NFL Media, more than 500,000 square feet of retail space and 314 apartment units — is expected to open prior to Super Bowl LVI in February 2022. More residential units and a 300-room hotel are planned for later phases. 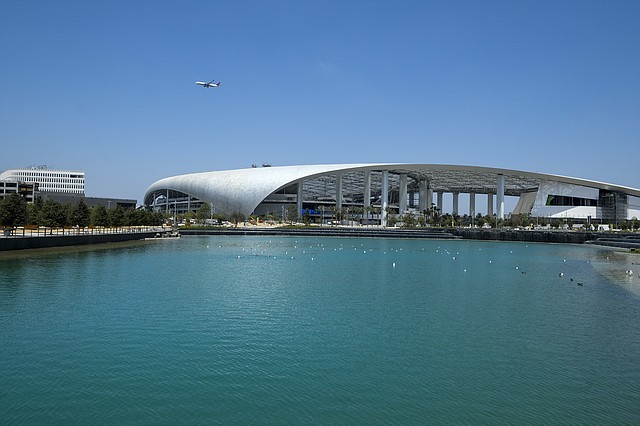 The first phase of the overall project’s development consists of more than 1.5 million square feet of retail and office space. When the complex is complete it will include up to 3,000 residences, a hotel, and more than 20 acres of public parks.

But in coming weeks, all eyes will be on the huge stadium. San Francisco-based Social Finance Inc., or SoFi, secured naming rights for the venue in September with a 20-year deal reportedly worth $400 million.

“This is a fantastic addition to a pantheon of amazing athletic venues in Los Angeles,” said Christopher Thornberg, founding partner of Westchester-based Beacon Economics. 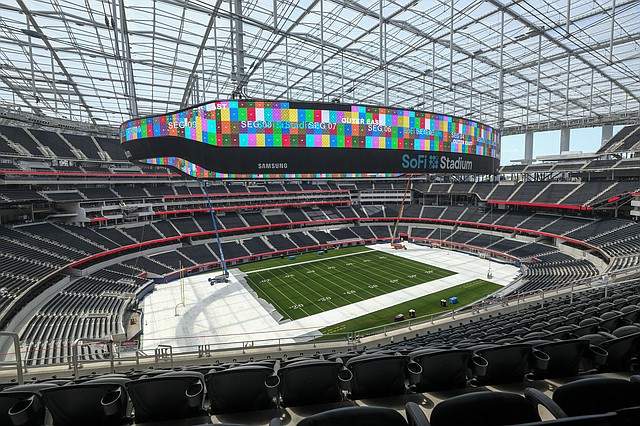 The most prominent example of this new technology is the giant videoboard that will be the dominant feature fans will see once they are allowed inside the stadium bowl.

The videoboard is 120 yards long and roughly 75 yards wide — 20% longer and 50% wider than the regulation football field itself — and hangs suspended over the field, affording every seat in the house a view of the video features.

But the entertainment center extends beyond the stadium. Directly outside is a 2.5-acre plaza that will host community events and gatherings — once those are allowed again. Fort Worth, Texas-based American Airlines Group Inc. last August agreed to pay $90 million for naming rights to the plaza.

Next door, under the same canopy as the stadium, is a 6,000-seat theater that’s still under construction. That venue will be only slightly smaller than the 7,100-seat Microsoft Theater, located across from Staples Center at L.A. Live.

These additional venues are included in the estimated $5 billion price tag for the stadium complex. That figure is an estimate from outside sources because Kroenke’s development company has steadfastly declined to discuss any cost figures.

With all these entertainment features, “SoFi Stadium has the potential to surpass the Rose Bowl and the Coliseum in terms of regional economic impact,” Lawren Markle, spokesman for the Los Angeles County Economic Development Corp., said in an email.

Across from the stadium is the seven-story, 450,000-square-foot office tower with studio space for NFL Media, which in March 2018, announced it would take nearly half of the building’s square footage.

The NFL plans to house operations for hundreds of employees at NFL Network, the NFL.com website, the NFL app and NFL RedZone, which supplies simultaneous rolling coverage of every league game.

Kroenke development company executive Gannon said the core and shell of the building have been completed and work is underway on the interior office and studio space. He said the building remains on target to be completed within 18 months, in time for the 2022 Super Bowl.

Beyond the stadium complex and NFL Media tower, Gannon said the first features of the larger Hollywood Park development — a manmade lake and a 10-acre park — have already been completed.

After considerable rain delays in the early phases of construction, the race to the finish line this year has come with minimal delays despite the death of two construction workers and at least 55 of the site’s 4,000-plus workers testing positive for Covid-19.

Construction has been led by a joint venture of New York-based Turner Construction Co. and Century City-based AECOM’s Hunt Construction unit. Completion of the stadium — which was supposed to come in time for the July 24 opening concert by Swift — was only delayed by about three weeks.

“As the impact from Covid-19 was beginning to be felt, the Turner/AECOM team implemented a robust mitigation program including temperature screening and mandatory social distancing and face masks at all times, in addition to frequent sanitizing of common areas,” Rich Bach, senior vice president with Turner Construction, said in an email. “With strict protocols in place, we maintained progress on the project and are in the process of turning over the stadium for the owner’s use.”

With stadium construction now complete, the main missing ingredient will be fans. As of press time, the first event to be held inside the new stadium will be the 2020-21 season-

opening game between the Rams and the Dallas Cowboys on Sept. 13 though as with much else during the Covid crisis, that’s subject to change.

Because of bans on mass gatherings by L.A. County and the state, no fans will be allowed at this game or at several succeeding games for both the Rams and Chargers.

Indeed, it could be next year before any fans set foot inside the stadium.

But Thornberg said that should not pose a significant problem.

“Look, Stan Kroenke has plenty of ability to withstand a six-month delay — and that’s what this is, a six-month delay,” Thornberg said. “Once fans are allowed, this venue and all local sports venues will be busy, busy, busy. There’s so much pent-up demand building up now because people are tired of staying at home.” 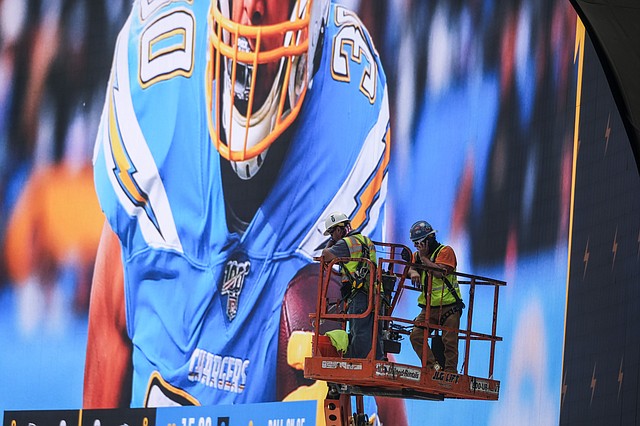 More than 17,000 workers have completed more than 12 million worker hours on the project so far. 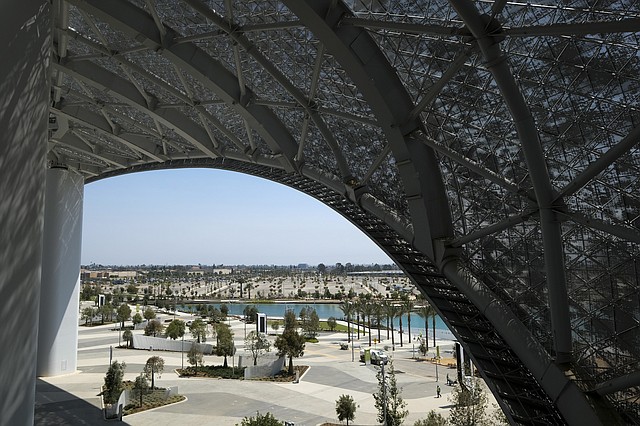 The Hollywood Park development sits on 298 acres, which is 3.5 times the size of Disneyland Park.