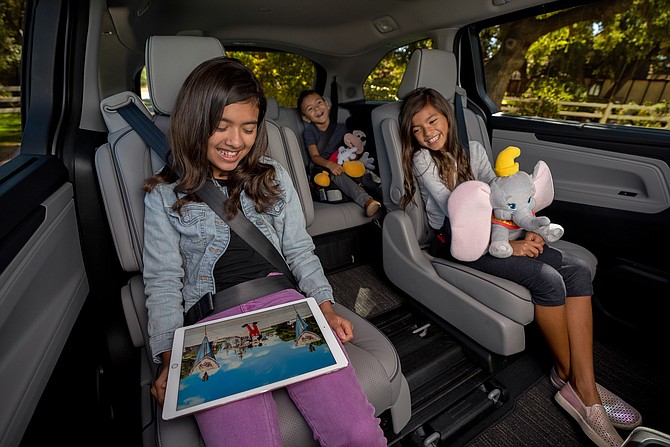 Honda’s 2021 Odyssey is the official vehicle of Disneyland Resort.

Sales of light trucks and SUVs under the Honda moniker were down 6.6% while the same category for the Acura brand rose 0.9%.

The Torrance-based automaker’s sales for the first seven months of 2020 were down 21.8% compared to the same period last year, with the Honda division down 22% and the Acura division off 20.2%.

Its competitors’ July results were a mixed bag.

“We’re seeing evidence of more typical new-car shoppers gravitating toward the used car market than usual during the pandemic due to a combination of factors: Consumers are being more financially responsible, interest rates and (certified pre-owned) offers have been extremely favorable, and inventory has been severely limited on the new side,” Ivan Drury, senior manager of insights at Santa Monica-based Edmunds.com Inc., said in a statement.

American Honda established its first U.S. business operation, a storefront in Los Angeles, in 1959. It has built 26.1 million cars in the United States since 1982.

The automaker has 19 manufacturing plants in North America that produce nearly 90% of the Honda vehicles sold here.

It has more than 31,000 employees in the United States, with 75% in manufacturing roles.

American Honda has been the official vehicle of Disneyland Resort for the past 15 years. The automaker’s new marketing campaign for the 2021 Odyssey, which launched on social media on Aug. 3, centers around a family’s journey through the theme park’s attractions.