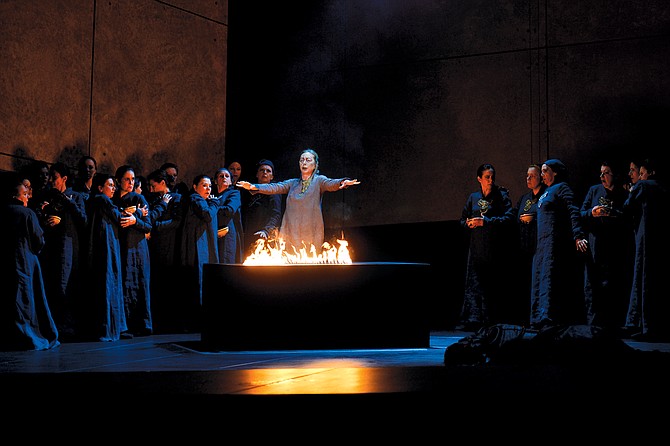 “Il Trovatore,” performed at the Opéra de Monte-Carlo, was scheduled for the L.A. Opera in September.

L.A. Opera is the latest Music Center resident performing arts company to announce postponements and cancellations due to Covid-19.

In a July 28 statement, the company said it would postpone four productions scheduled for fall 2020 for a full year, shifting them to the first half of the 2021-22 season. Most of the original cast performers are expected to return for the new dates.

L.A. Opera said pandemic cancellations to date as well as the postponements could result in a potential revenue loss of between $21 million and $31 million. The company said it is working to mitigate those losses through fundraising and cost reductions.

Postponed performances include mainstage productions at the Music Center’s Dorothy Chandler Pavilion (“Il Trovatore,” “Tannhäuser” and “Cinderella”) and one Off Grand performance, “Get Out” In Concert at Theatre at Ace Hotel, a screening of the 2017 Jordan Peele horror film with a performance of the movie score by the Los Angeles Opera Orchestra conducted by Michael Abels, composer of the film’s music.

L.A. Opera plans to present new programming digitally in fall 2020 and has tentative plans for in-person performances in outdoor spaces. The company said it hopes to resume live performances in early 2021.

Like the opera company, the Los Angeles Master Chorale said it will postpone its scheduled 2020-21 season at Walt Disney Concert Hall to the 2021-22 season, with possible changes to the repertoire, dates and times.

Center Theatre Group, comprised of the Ahmanson Theatre and Mark Taper Forum on the downtown campus and the Kirk Douglas Theatre in Culver City, said in the spring it had postponed its summer season until the fall. In June, CTG announced live performances at its theaters would not begin again until April 29, 2021.