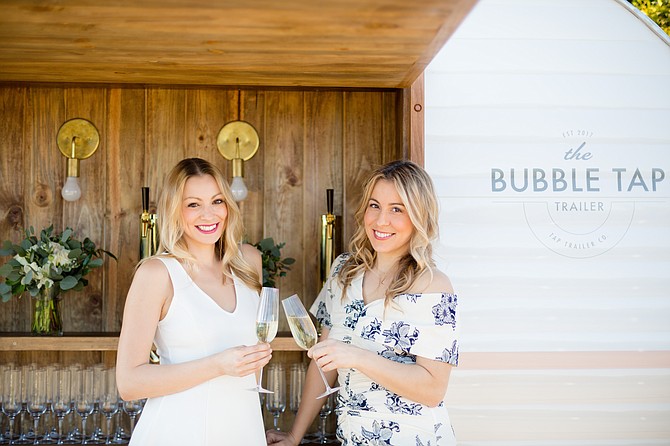 Jennifer and Nicole Disotell launched Tap Trailer in 2018 and plan to move to a franchise model.

Jennifer and Nicole Disotell, founders of West Hollywood-based Tap Trailer Co., like to call themselves “sisterpreneurs.”

The pair spent 10 years running their own digital marketing company before launching another business that is also a family affair: Tap Trailer Co., home of the Bubble Tap Trailer.

After a decade in digital marketing, the Disotell sisters, both in their 30s, had had enough of search engine optimization, website development, public relations and everything else that went into running a marketing company.

“We spent our days behind a computer poring over code and numbers and data,” Jennifer said. “It becomes mind-numbing.”

Taking a break from the numbers, Jennifer and Nicole joined their father on a trip to Europe. In Italy, they encountered cute, threewheeled Piaggio & Co. Ape submicro vans, manufactured as commercial vehicles by the maker of Vespa motor scooters.

“There was something about it that struck a chord with us,” Jennifer said during a prelockdown sit-down over lavender lattes at the AllBright, a West Hollywood coworking club for women. “But we wanted to do it bigger and better. We wanted something that was Instagrammable, but also paid tribute to the vintage style.”

The sisters acquired a 1953 vintage Westerner travel trailer — nicknamed the “canned ham trailer” because of its distinctive metal shape — and decked it out with a Champagne Room and photo booth on the inside.

Jennifer put in $30,000 of her own funds as an initial investment, and each sister added another $20,000 to cover expenses about 10 months into the effort.

The server dispenses the client’s choice of bubbly wines and non-sparkling wines through the Tap Window on the outside of the trailer.

Making bubbly come out of a tap called for plenty of trial and error due to issues of temperature and carbonation unique to keeping the product perfectly bubbled.

“We have a complete tap system that is somewhat proprietary,” Jennifer said. “It took Nicole three different tries to get it perfect because bubbly is very finicky, it’s really hard to do. It’s very different from a product that would normally go through a tap, (like) beer.”

Even though they use the evocative name Champagne Room, only the sparkling wine from the Champagne region of France can legally be called Champagne. Plus, Champagne ferments in bottles rather than the kegs that serve a tap.

Not a food truck

The Tap Trailer does not operate like a typical food truck. State liquor laws prevent parking on streets to serve alcohol without often-expensive city permits that are paid for by the company that hires the Tap Trailer.

The trailer typically operates like a catering service, parking on private property for weddings, corporate events, Hollywood parties and the like. Prices range from an $895 weekday rental minimum to a $1,495 minimum on a weekend, depending on the guest count, and the type and amount of wine the client selects.

The sisters said a keg serves 110 to 130 glasses, which means it takes a fairly large party to use one up. However, they report a bachelorette party of 15 women polished off an entire keg.

Partners include brothers Andrew and Ryan Choi, who count among their business ventures becoming one of the first franchisees for F45 Training gyms, and Cynthia Eskew, who has served as an executive in the beverage and entertainment industries.

The Disotells already have expanded the business to include eight licensees in other U.S. cities and plan to move to a franchise model, which allows the company owner more control of the branding and operations. The goal is to add more cities with a territory business model, limited to one franchise in each area to allow that franchise more opportunity for success.

Instead of retrofitting admittedly highmaintenance vintage trailers for franchisees, new trailers in the same style were produced for the licensers by a studio car company located in Hollywood.

Jennifer and Nicole have pledged to support women in business by making sure 85% of the franchisees are women. “You find these women who have (raised) kids, and now they want to do something that they’re passionate about, and want to take the next step,” Nicole said.

Licensee Dawn McKee is making it work in Dallas. She left a successful dental career to license a Bubble Tap Trailer after hearing investor Bass talk about the business on a podcast.

“I do think it’s important for people who are entering their 40s and don’t have little babies at home anymore, or maybe are in a job where they are not fulfilled,” McKee said.

Tami Jennings in Kansas City, Mo., combines the Bubble Tap Trailer with a career in digital marketing and raising a 3-year-old. She said she has taken the trailer to corporate and small business events, as well as a party celebrating the Kansas City Chiefs Super Bowl win earlier this year.

While Jennings still maintains a full-time job to make ends meet, she loves the fact that the trailer has become an entrée to the local business community. “(I’ve met) people and companies that I didn’t even realize were in Kansas City,” she said.

The Disotell sisters plan to begin a first round of funding later this year with a goal of at least $1 million and an eye toward opening a brick-and-mortar bar as well as producing their own sparkling wine label.

While the Covid-19 crisis upends future planning, Jennifer said the company has discovered a new sideline designing cocktails for virtual happy hours. She predicts that the virtual happy hour will continue to be popular even after the pandemic ends.

And timing is on their side.

“We are fortunate that our business begins to ramp up during the summer, with our busiest time of year actually being October through December,” Jennifer said. “So, if things begin to rebound by then and there isn’t a long-term impact on the overall economy, we should be able to weather this particular storm.”