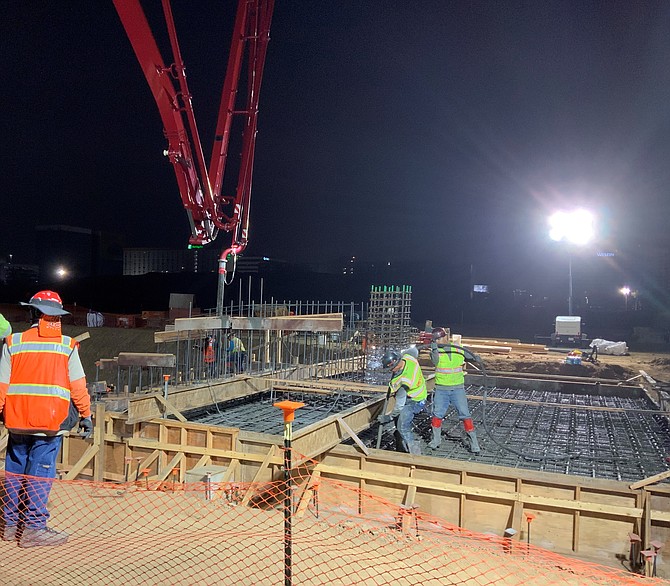 LAX construction continues during the pandemic.

While work has shut down across much of the region as shelter-in-place restrictions have taken hold, construction on several of the area’s largest infrastructure projects has mostly continued apace.

Projects with a green light include the $14 billion in modernization efforts at Los Angeles International Airport, $9.3 billion in construction work on the Metro Purple Line Extension along Wilshire Boulevard and the $1.5 billion Gerald Desmond Bridge Replacement project at the Port of Long Beach.

With projects of this size and scope continuing, the economic impact will help offset the drop in economic activity from the many business closures mandated by state and local governments to combat the spread of Covid-19.

Los Angeles International Airport’s terminal rehabilitation and construction, as well as the $5.5 billion program to improve ground access, are continuing, according to Los Angeles World Airports, the city agency that runs the airport.

“Our Landside Access Modernization Program and terminal modernization projects continue as planned,” according to a statement relayed by spokesman Heath Montgomery.

The statement added that work has been allowed to continue because the state and city governments have classified the projects as “essential operations.”

The statement also said the project developers — LAWA and, for the terminal work, individual airlines — and contractors are “implementing a variety of measures to avoid the spread of Covid-19 and protect workers. These include taking the temperatures of workers before they are allowed on the job sites and requiring social distancing.”

Similarly, all rail construction projects overseen by the Los Angeles County Metropolitan Transportation Authority are continuing as planned, according to spokesman Jose Ubaldo. This includes construction and preconstruction work on the three segments of the Metro Purple Line.

“We have asked all contractors to fulfill their contractual obligations,” Ubaldo said. “We are monitoring the situation and are in close coordination with our contractors.”

Among the contractors is Sylmar-based Tutor Perini Corp., which is the general contractor for both the second and third segments, from Wilshire and La Cienega boulevards to the line’s Western terminus near the Veterans Affairs Department campus in West Los Angeles.

Work is also continuing on the Gerald Desmond Bridge Replacement project because the federal government has classified the project as critical infrastructure, according to project spokesman Denis Wolcott. The main contractor on the project is Century City-based AECOM’s Shimmick Construction unit.

There have been some changes, though. “Non-essential activities, such as community and guest tours of the project, have been canceled until further notice,” Wolcott said.

But even as work continues, the agencies overseeing these projects are casting a wary eye toward the future, anticipating reduced revenue streams to pay for the projects and possible shifts in government shutdown orders.

“Los Angeles World Airports is evaluating potential financial impacts due to the dramatic reduction in air travel and passenger traffic,” the agency said in its statement. “LAWA is looking closely at future construction and capital projects to see if there are opportunities to make prudent adjustments to them.”

At Metro, spokesman Ubaldo said the agency has “asked contractors to share their contingency plans, should there be a governmental directive to shut down construction.”