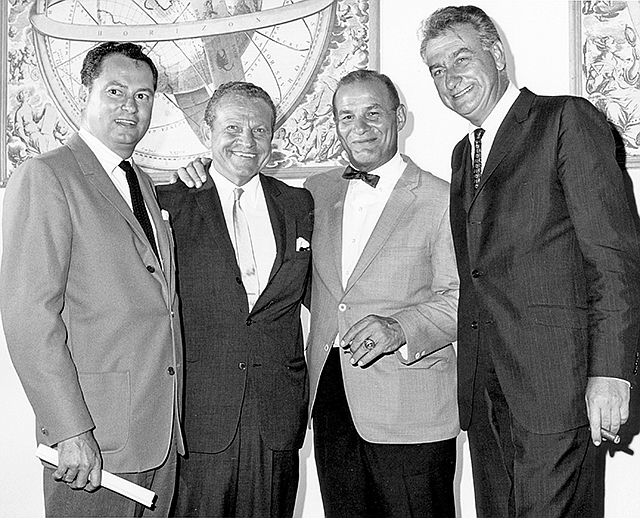 The Handoff: Barron Hilton, Samuel Schulman, Sid Gillman and Eugene Klein announce the sale of the San Diego Chargers in 1969.

William Barron Hilton, who died Sept. 19 at his home in Los Angeles at the age of 91, had an outsized impact on the city’s business community.

The son of hotel mogul Conrad Hilton, he initially eschewed the family business, acquiring a citrus distribution company at age 19.

Hilton would eventually assume the reins of his father’s hotel company, where he would transform the hotel chain and, in the process, the industry itself.

“I don’t think you can say enough about his impact on the hotel business. Hilton is a huge name in the hotel business in the U.S. and worldwide,” said Alan Reay, president of Atlas Hospitality Group. Reay added that Hilton became known for the “quality of their assets” under his leadership.

But Hilton would also make his mark on the business landscape in a number of other ways, ranging from the use of innovative real estate tools to remaking professional football.

Here’s a closer look at Hilton’s legacy and some of the areas where he had a lasting impact.

Football: The Chargers, the American Football League and the Super Bowl

In 1959, after oil tycoons Lamar Hunt and Bud Adams were turned down for expansion teams by the National Football League, they pulled together a group of business leaders from across the country to start a competing league.

The owners, including Hilton, launched the eight-team American Football League in 1960 and nicknamed themselves “The Foolish Club” for challenging the NFL.

Hilton’s franchise, the Los Angeles Chargers, lost $900,000 in its first season after trying to compete with the Los Angeles Rams to fill seats. So before the 1961 season, Hilton moved the Chargers to San Diego, where they would play for more than 50 years. The team won the AFL championship in 1963. Hilton helped negotiate the AFL’s merger with the NFL in 1966 and played a key role in creating the Super Bowl, which was held at the Coliseum in 1967.

In 1966, Hilton sold his majority interest in the team for $10 million, a record at the time.

In 2017, the Chargers moved back to L.A., joining the Rams as the city’s second football team. Both teams will play at SoFi Stadium, which is scheduled to open next summer in Inglewood.

When Hilton’s father Conrad died, he left 97% of his estate to the Westlake Village-based Conrad N. Hilton Foundation. In 2007, Barron Hilton announced plans to do the same.

Barron Hilton’s net worth was estimated at $5.2 billion last year by the Business Journal, meaning that $5 billion would go to the nonprofit, which works on clean water and sanitation facilities in developing countries, treating blindness, and housing for the homeless.

Barron Hilton served as the foundation’s chairman from 2007 to 2012. He was succeeded by his son, Steven Hilton.

During Barron Hilton’s tenure, the organization saw $160 million worth of Hilton stock that had been left to the foundation by Conrad Hilton increase in value to more than $2.9 billion.

The Hilton family is perhaps best known for Hilton Hotels Corp. Barron Hilton reportedly turned down his father’s initial offer to work at the hotel company for $150 a week. When Hilton finally did come on board, he was already a millionaire after buying Vita-Pakt Citrus Products Co. and co-founding McDonald Oil Co. He later started Air Finance Corp. and the Carte Blanche credit card.

In 1954, Hilton became a vice president at the hotel company.

Hilton implemented widespread changes that impacted the casino industry after he purchased the Flamingo and the International in Las Vegas.

He is credited with replacing human “eye in the sky” security observers with video cameras, according to the L.A. Times. He also added “progressive” slot machines that paid out record jackpots and helped generate free publicity for the casinos.

Hilton helped spur the expansion of management leaseback deals in the hotel industry.

In 1975, he sold half of Hilton’s equity in six major hotels. The company continued managing the properties for a percentage of room revenue and gross profits. The money raised was used to buy back Hilton stock.

He also created the Hilton Inn franchise program. The fees generated by the program were a huge source of revenue for the company, helping to fund expansion efforts. Franchise agreements are now common in the hotel industry.