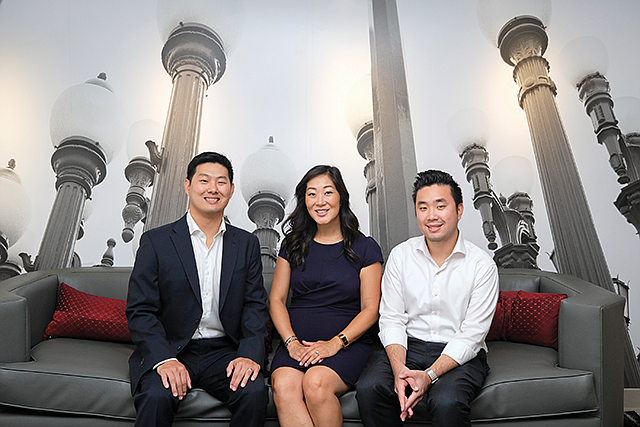 Launched in 1995 as a side business by practicing physician David Lee, the company now boasts 18 million square feet of office space and thousands of multifamily units.

While Lee remains involved, he has handed off management of the company to three of his children.

Together, the Lee triumvirate has pushed Jamison into new areas. Once known primarily as landlords for Class B office buildings in Koreatown, Jamison now reaches from downtown to the Westside.

And the company has shifted to multifamily developments, both as adaptive reuse projects and as new builds. That includes the Circa, a massive residential and retail effort at 1200 S. Figueroa St. with 648 luxury units and 48,000 square feet of retail space.

The younger Lees sat down with the Business Journal to discuss the family dynamic, the company’s roots in the 1992 L.A. riots and expansion into new markets.

The three of you really have L.A. in your DNA. You grew up here, and your dad has long been a major player in local real estate. How did watching him prepare you for your roles at Jamison?

Phillip Lee: It was forced preparation basically. He’s the kind of person who doesn’t ever stop working. He was still practicing medicine when we were growing up and doing real estate. When I was learning to drive with my learner’s permit, he would have us drive by buildings to check them out and look at new properties.

Jaime Lee: I’ve been working for my dad since I was 5, whether it was going on rounds with him at the hospital when we were kids on the weekend or going to his medical office. Very early, he was ingraining in us that it’s a family endeavor, that it’s a team effort for us all to continue to work together.

Garrett Lee: I got that experience when I started full time about five years ago. He’s pretty much in the office every day all day, just working so hard. That constant exposure made it a lot easier to pick up on real estate philosophies and how he got the business to work.

What does it mean to you to do this in your hometown?

JL: We grew up in Koreatown, coming here at a time when we were just emerging from the riots, and Koreatown was certainly not the cultural center or even the geographical center it is now. Our commitment with our generation is really seeing what is the path forward for this neighborhood, and how do we continue to develop and improve it for future generations.

Jamison was once known for office properties. What got you interested in residential buildings?

GL: After the recession, the office market took a big hit from a lot of small businesses going out of business and moving out. Our buildings, a lot of them had a big drop in occupancy. At the same time, the opposite was happening with the residential market, and rents were starting to rise to the point where it made sense to actually build apartments. One of our strategies was to vacate an office building and relocate as many people — long-term tenants — as possible to other properties we had to help them out and continue that relationship. And once that building was vacant, to convert it to apartments. We were able to hit about 95% occupancy on the apartments pretty quickly.

Why pursue ground-up developments instead of sticking to adaptive reuse projects?

JL: We started looking at the cost of development and zoning in Koreatown and seeing that there were opportunities with existing parcels of land that made sense to develop. When we first started to look at it, land was $250 to $300 a square foot. Downtown at the time was $600. Now downtown is well over $1,000 a square foot, and Koreatown has gone up.

How important are amenities to buildings today?

GL: Very important. With the amount of new product that’s coming online, you really have to stay competitive and give something different to prospective residents. People are redefining how they look at multifamily. It’s become a lot more hospitality focused in terms of design and amenities and services. A lot of buildings now are offering package lockers, dry cleaning pick-up, dog walking, dog daycare, vending machines that are always stocked.

Jamison recently purchased a property in West L.A. Is the company looking to do more on the Westside?

PL: It’s all about opportunity — finding the right mix of land value and areas that we understand.

What are some of the biggest development challenges in L.A. today?

GL: Everyone’s so busy. There’s only so many construction workers, only so many architects and engineers. One of the challenges is being able to build a project on the schedule you want. We could build even more if there was a bigger labor pool out there. The city is very busy right now, too. Everyone is stretched a little thin.

What’s it like doing this as a family business?

PL: It’s different. You can be a lot more free than with a typical corporate structure where none of the people are related. You can have very honest and frank conversations with each other.

JL: It also carries over into Thanksgiving and Sunday dinners.

PL: Which is also really rewarding. There’s no politics and no office in-fighting. We’re all going in the same direction.

What direction do you see the business going in in the next few years?

GL: We see a lot more people taking a conservative look and maybe backing out of certain development projects. We’re still very focused on the housing shortage and gentrifying areas that really should be dense, near mass transit and located on a major corridor like Wilshire Boulevard.

JL: We’ve seen a lot of factors point us toward a downturn. We’re hoping, especially in the L.A. market, it’s more of a minor correction as opposed to a major recession. We haven’t altered our plans. We’re committed to about five construction starts a year. Even if we are in a recession, by the time (a project) opens, we’ll be emerging from it.