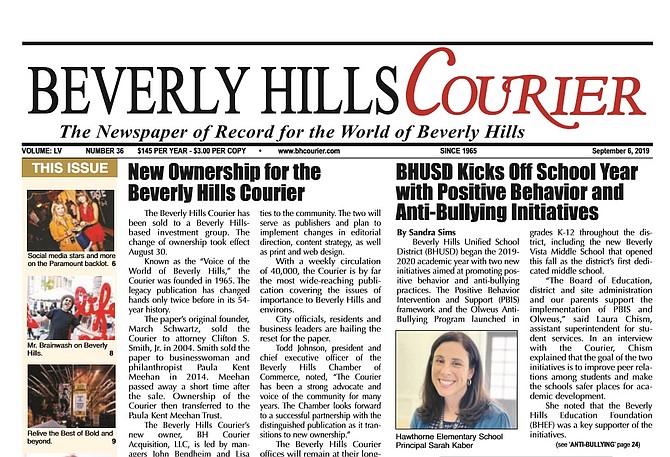 In an interview, Bloch, who will share publishing duties with Bendheim, declined to identify the other investors or the purchase price for the free, weekly newspaper. It currently has a distribution of 40,000.

The ownership change is a new direction for the Courier, which operated under hair care entrepreneur Meehan’s estate for the past five years.

Meehan, who made millions of dollars from her Redken Laboratories Inc. beauty products, bought the Courier a month before she passed away in 2014.

The Courier was launched in 1965 by editors at the Los Angeles Times Mirror, the Times’ onetime evening newspaper. It has broken stories, including reporting on Erin Brockovich’s lawsuit against the Pacific Gas and Electric Co., and recently focused coverage on L.A. Metro’s planned expansion into Beverly Hills.

Bloch said she plans to expand the publication’s distribution into West Hollywood and also will hire additional members for the publication’s editorial and design team. The paper has two full-time editors and two staff writers. Its Sept. 6 issue ran 31 pages.

Bloch noted that her entry into the current media market is an uphill climb. Publications have shuttered, consolidated or administered mass layoffs as advertisers move their business to Facebook Inc. and Alphabet Inc.-owned Google.

But Bloch said covering a community with the wealth and cultural impact of Beverly Hills appeals to advertisers.

“The world looks at our real estate, fashion and also well-run infrastructure,” Bloch said. “We are trendsetters on the world stage.”