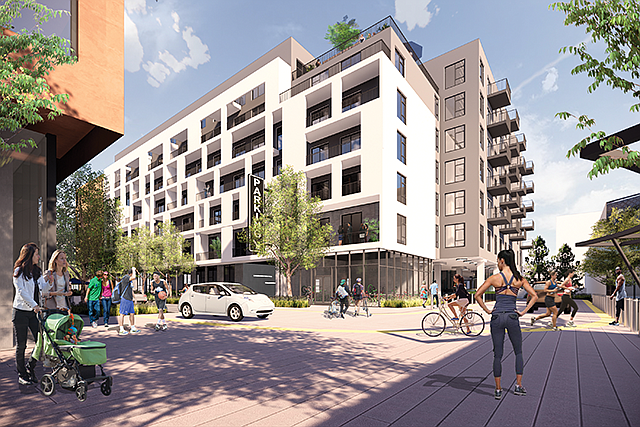 Lot Full: Developers are rethinking the utility of parking structures.

Cars still rule Los Angeles, but multiple large-scale projects around the city indicate that may be changing.

Over the past five years, Los Angeles has seen a surge in the number of new light rail stops, and a handful of extensions are planned to the system, all with the goal of making the city a less car-centric metropolis.

At least one architecture firm is starting to consider how that shift could affect basic urban features such as parking garages.

Long Beach-based Studio One Eleven has designed a parking structure capable of being easily converted into other types of properties for the Westside Gateway development in Long Beach.

“There has been much speculation on how to reuse parking structures that may become obsolete due to driverless vehicles and other trends,” said Studio One Eleven Founding Principal Alan Pullman in a statement. “The strategy we’re introducing not only anticipates solutions from the start but integrates with other enlightened approaches to building flexibility and pedestrian-oriented design.”

The 1.3-million-square-foot Westside Gateway is being developed by Trammell Crow Residential Co. Its nine-story garage is being designed so that parking areas can be replaced with housing, offices and amenities. The structure features a nonsloped floor, which will make the conversion process easier.

Meanwhile, other developers and architects are focusing on enhancing parking garage designs.

Developer Walter Marks’ $400 million residential project on Miracle Mile will boast an automated parking garage. Tenants will drop off their cars and then a lift mechanism will lower the vehicles into an underground storage area. The facility will also be able to automatically charge electric cars.

Marks already has an automated parking facility with AutoParkIt at the Helms Bakery complex in Culver City.

CityLift Parking is also working on automated parking systems, including a three-level design in Hollywood that it says can save 60% of space over traditional parking lots.