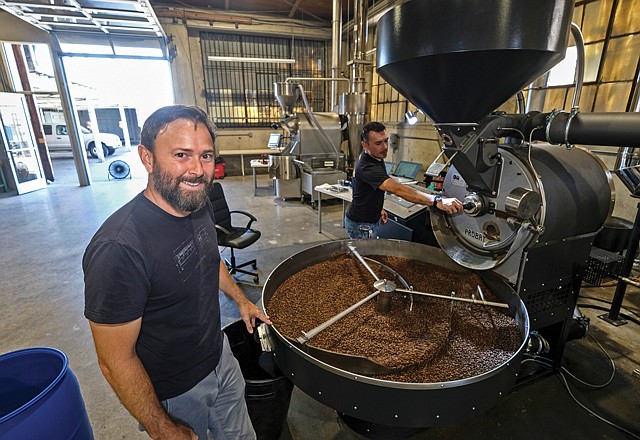 Roasters Charles Babinski and Kyle Glanville don’t want to sell their coffee in your supermarket.

The founders of Go Get ‘Em Tiger — which in the last year raised $4.7 million, launched its seventh location and opened a 16,000-square-foot roasting facility in Vernon — have loftier ambitions.

“We want to be an institution in Los Angeles,” Glanville explained.

That will be no small feat. Coffee competition is fierce in Los Angeles, and it’s getting stiffer by the day.

In coffee circles, L.A. is considered the forefront of the West Coast’s third-wave coffee movement. The new breed of purveyors is reshaping the industry with their curated coffees and plant-based drinks.

Glanville is a high school dropout who started GGET operator G&B Coffee with Babinski seven years ago. G&B launched as a pop-up that eventually became the trendy Sqirl restaurant in East Hollywood.

Competing with Starbucks Corp. and other industry giants, micro-roasters like G&B are pushing for a more nuanced approach to coffee-making and staking their claim in L.A. amid a renaissance in the city’s culinary culture. It’s part of a $51 billion U.S. coffee and snack shop industry, according to Ibis World Inc. But there are signs these companies are influencing the industry. Starbucks, which accounts for nearly a quarter of the market share, has recently introduced their own high-end brand.

Purveyors of the third wave often highlight their sourcing as part of the experience, and many embrace minimalist Scandinavian-like design in their cafes.

“At the national level, people are looking to Los Angeles as one of those special coffee cities, the way they were looking at Seattle or San Francisco in years past,” said Peter Giuliano, researcher at the Specialty Coffee Association.

One reason is that baristas have been creating interesting chilled coffees that are perfect for the warm climate. Influences from Latin America, Australia and Asia — along with California’s healthy lifestyle — have also seeped into cafe venues, creating an innovative culinary movement.

There are drinks like the horchata latte made by Tierra Mia Coffee Co., or GGET’s iced almond-macadamia milk latte, which the New York Times called “almost certainly” the best latte in the United States.

“For such a long time, specialty coffee was defined by cappuccinos and cafe lattes, and people like G&B, their menus are a lot more innovative,” Giuliano said.

These new-breed roasters and baristas are going far beyond what second-wave companies like Starbucks and International Coffee & Tea did. They’re selling a more artisanal experience and, in the case of GGET, one that eschews wholesale distribution.

Glanville and Babinski, who worked at Intelligentsia Coffee Inc. before starting G&B, plan to have 30 stores in Los Angeles by 2021. “We want to be a part of the fabric of the city,” Glanville said.

For those who can’t make it to their cafes, GGET has launched a subscription service, using the direct-to-consumer model that has seen success in other industries. They don’t want to go through distributors or wholesalers for fear of diluting their brand.

GGET’s founders say they believe there’s plenty of strength in the L.A. coffee market, especially given the success of other specialty makers.

Part of L.A.’s appeal, aside from its sheer size, is that the city has been a traditional launching pad for successful West Coast brands. It’s where Starbucks experienced massive growth. Same for locally grown Coffee Bean & Tea Leaf, which was recently acquired by Jollibee Foods Corp.

“Los Angeles has one of the strongest progressive coffee cultures in the world,” said Colby Barr, co-founder of Verve Coffee Roasters. “I feel like it’s having its moment.”

Santa Cruz-based Verve opened a 7,000-square-foot flagship roaster and restaurant downtown last month. The location will be a testing ground for new drinks and features a craft coffee bar. Mocktails like the Cascara Negroni — made with orange bitters, juniper tonic and cascara vermouth crafted from the skin of a coffee cherry — can be had for $10.

In addition to the GGET location, the Sydney-based Paramount Coffee Project recently arrived at ROW DTLA. Nearby, Bay Area-based Tartine opened a 6,000-square-foot roaster for its Coffee Manufactory brand earlier this year. And there are several more roasters in the surrounding area.

Los Angeles has been a magnet for regional coffeemakers, said Steve Miersch, who runs Brooklyn-based Pulley Collective. Miersch opened a Vernon outpost of his coffee-roasting plant this year, betting that more cafe owners will be looking to prepare their own beans.

The operation runs much like a space run by WeWork Cos. Inc., catering to smaller operations that don’t have the funds or volume to invest in production but want control of their product.

“There’s this explosion in the higher-end coffee shop owners that are opening up,” Miersch said. “The more educated the coffee shop owner gets about the product, the more likely they are to want to roast. It’s an evolutionary growth.”

Although Americans aren’t necessarily taking in more coffee, they are pickier about what they’re sipping. And that makes premium coffee more popular than ever.

For the first time, so-called gourmet coffee beverages accounted for a larger share of consumption than regular coffee in 2018, according to the National Coffee Association.

NPD Group Inc. found that Americans’ love of the beverage has fueled growth in quick-service coffee shops, which expanded by 3% last year.

“This is more elevated than Starbucks,” she said, hovering over her opened Apple laptop. “I feel like the coffee is fresher.”