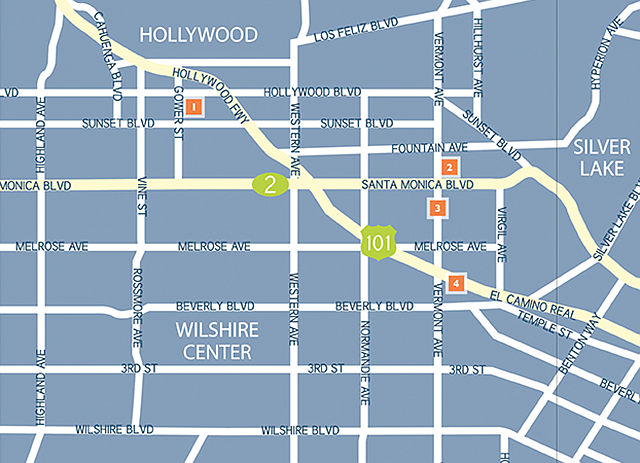 East Hollywood is ready for its close-up. Once overshadowed by the bright lights of Hollywood proper, the hipster vibe of neighboring Silver Lake and Los Feliz, and the energy of nearby Koreatown, East Hollywood now finds itself squarely in the spotlight.

The longtime home to Little Armenia, Melrose Hill and Thai Town, the area will soon be the site of new housing, retail and an events venue.

No longer an afterthought on the way to Hollywood, Los Feliz or Koreatown, East Hollywood now finds itself filling up with fresh opportunities. At least part of that development is caused by overflow from more well-known areas nearby.

Kitty Wallace, an executive vice president at Colliers International Group Inc., said some people have wanted to move away from touristy areas in Hollywood and the crowded downtown area.

“Being in Hollywood and downtown was hip and cool, but now people want to be in Silver Lake and East Hollywood,” Wallace said. “It feels more special, and there’s land there that you can actually develop.”

“The area is being squeezed from one side by Silver Lake and on the other side, in Hollywood, there’s not much they can do anymore,” MCAP Partners Managing Partner and co-founder Jacques Massachi said. “Everything is already expensive. The natural growth is to go east.”

MCAP Partners is developing a concert and event venue that can house 1,200 people. It will be completed in 2020.

“I am a neighborhood-oriented person, and I want to keep this project unlike other live venues,” Massachi said. “I want it to be for the neighborhood.”

Massachi said once the venue opens, it will hire locally. He also expects it will host events for local groups.

Many projects are mixed-use or housing developments.

The second stage of the Path Metro Villas project is underway. It will include 122 units and mental health and healthcare clinics.

A project by Little Tokyo Service Center and the Los Angeles County Metro Transportation Authority will include 160 to 200 affordable units as well as social service space.

A mixed-use project at 5750 Hollywood Blvd. will have 161 housing units.

Development in the area shows no signs of slowing. Over the next few years, Wallace expects to “see a tremendous amount of units” come to the market.

DESCRIPTION: The mixed-use project will have 161 units and nearly 6,000 square feet of ground-level retail.

DESCRIPTION: The project will have 160 to 200 affordable units with 15,000 to 20,000 square feet of commercial and social service space. Half of the units will be reserved for homeless individuals and families.

DESCRIPTION: The former movie theater is being developed into a 1,200-person concert and event venue.

DESCRIPTION: The second phase of the project will have a health care clinic, mental health clinic and 122 units of housing.

ESTIMATED COMPLETION: First phase is open; second phase is scheduled to open in 2020.