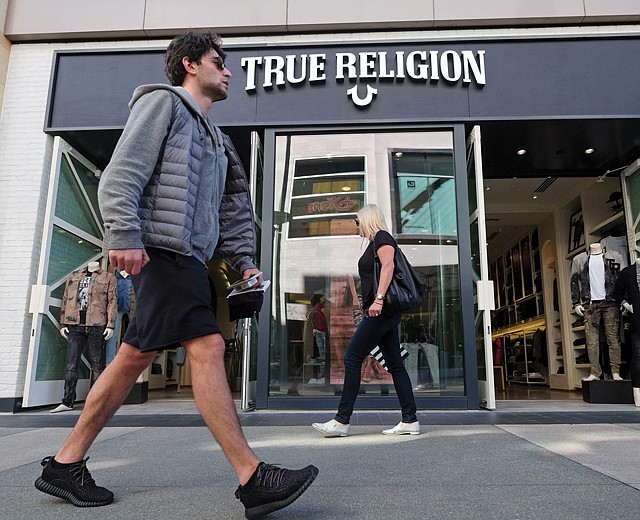 In Flux: True Religion may close some stores. Photo by Ringo Chiu.

Denim brand True Religion made high-end jeans popular in the aughts, a time when Paris Hilton was the “it girl” and low-waisted styles reigned.

But like Hilton and the trucker hat craze, the brand’s star faded along with consumers’ appetite for the company’s $300 jeans.

Today, two years after filing for bankruptcy protection, True Religion Apparel Inc. is angling for a comeback, and Farla Efros, the company’s latest interim chief executive, is pitching her vision for a revival.

Efros, a Canadian retail consultant, is the third chief executive to run the privately held company since last year.

Brought on in June, Efros’ turnaround plan is to focus on the brand’s “heritage.” She likes to tell the story of how she splurged on a pair of True Religion jeans when she earned her first paycheck in college.

“I think people forgot (us),” she said, recalling how friends and family were surprised the brand was even still around. But, she said, former customers still had good memories of True Religion.

“It’s building on those moments,” Efros said. “Yes, we are still around, and we are better, and we are streamlining our product and going back to the roots of who we are. We survived, which is a great story.”

The denim market is more saturated than ever, and it’s unclear if True Religion can convince shoppers to buy expensive jeans again.

“You can get a real good pair of jeans now for $50,” said Susan Anderson, a retail and apparel analyst at B. Riley FBR Inc. “Before, make and material was better at that higher price point. It’s harder to differentiate now.”

True Religion jeans, with its signature horseshoe and exaggerated stich pattern, were once regularly worn by celebrities. In the 2000s, the True Religion brand was one of the hottest names in a rarefied field that also included 7 for All Mankind and Rock & Republic.

But, as the athleisure trend eclipsed shoppers’ desire for denim, the company’s fortunes faded. True Religion filed for bankruptcy protection in 2017, just as the rise of ecommerce began to handicap brick-and-mortar companies.

True Religion emerged from Chapter 11 four months later with plans to reduce its term loans from $471 million to $113.5 million and extend its debt maturities to 2022.

The company is now largely controlled by bondholders.

Efros said the stigma of bankruptcy hasn’t hurt brands like it once did, and she sees the process as the new “new normal” as cost pressures crush traditional brick-and-mortar companies.

Retailers closed 7,000 stores in the first half of this year — more than they closed all of last year, according to a September report from BDO.

“The brand needed a reinvigoration. We are not doing a revolution, we are doing an evolution,” Efros said while sitting in a glass conference room at the company’s Manhattan Beach headquarters, where a 3-foot-high picture of Pacific Coast Highway hangs on the wall.

That evolution has meant ramping up social media campaigns with influencers, launching a new line and emphasizing the size range of True Religion’s jeans. It also means cutting delivery times of its product, which once took more than 10 days to reach a customer’s door.

Efros said part of True Religion’s difficulties came from the fact that the company didn’t evolve with the times.

She would not reveal the brand’s revenue or even if it was making a profit. True Religion still has about 100 stores but is likely to close some locations as it trims its footprint to focus on upscale malls and high-performing stores.

One of the company’s biggest moves has been hiring Allen Onyia as creative director. He has no formal design training, but he and his brother, Kyle, founded the digital magazine and Instagram account UpscaleHype that tracks celebrity fashion at a time when stars have found a new outlet online, a place that both amplifies and merges their style and their brand.

“We are going to be a design-led organization,” Efros said. “It’s a massive pivot.”

Efros is counting on Onyia to help reach older customers and bring in Generation Z with his mix of high-end sensibilities and an urban eye.

The brothers’ Instagram account is a collage of rappers, actors and models in high-end brands with a streetwear edge.

There are images of rapper Lil Uzi Vert in a Louis Vuitton leather jacket, New York Jets star Jamal Adams sporting a Vuitton utility shirt as he walks across the street, and model Hailey Bieber with a Celine bag and a Guess sweatshirt that says “Los Angeles.”

There are also plans for new True Religion logo designs for next year.

Efros said the company will not stray from its denim focus. “We are a denim company through and through, and that should be our core,” she said. “We can play in the streetwear piece, and we can play in athleisure wear — but in a mindful fashion, but not eliminating denim from our core.”

That’s a nod to True Religion’s original buyers, who have grown up and now have jobs and maybe even kids.

The strategy could help as shoppers return to brands like Tommy Hilfiger and Puma that were popular in the 1990s and early 2000s.

“There’s a lot of True Religions trying to make a comeback,” B. Riley’s Anderson said. “Maybe True Religion plays with that category, but we won’t know really for years — once the retro 1990s return is done — if these brands have staying power.”