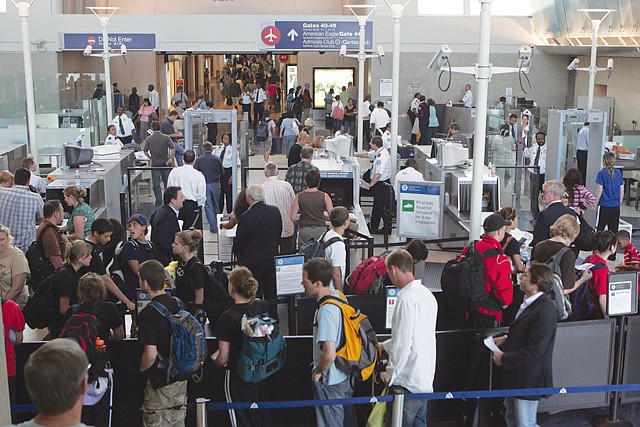 Los Angeles International Airport has for years been the juggernaut propelling the region’s burgeoning tourism economy. But not in 2019.

According to Los Angeles World Airports, the city agency that runs LAX, overall passenger growth slowed to almost zero for the first eight months of this year compared to the same period in 2018. And international traffic has fallen year over year during that stretch.

If the trend continues through the holiday season, this could be the slowest growth year at LAX since the Great Recession ended in 2009.

Airport and tourism officials pin the blame on the rising value of the dollar, carriers cutting back on flights in saturated markets such as Mexico and the grounding of Boeing Co.’s 737 MAX planes.

By comparison, passenger volume at LAX in 2017 was up 4.85% for the same period compared with the first eight months of 2016 with the international passenger component up 10%.

Growth in airport passenger traffic nationwide was roughly 4% for the first eight months of this year, according to aviation consultant Michael Boyd, president of Evergreen, Colo.-based Boyd Group International.

It has been a different picture at California’s other major airport, San Francisco International, where passenger traffic was down 0.3% for the first eight months of this year compared to the same period last year. However, unlike at LAX, international traffic at SFO was up 7.8%.

Tourism officials say a big reason for the drop in international passenger traffic at LAX has been the rising value of the dollar compared to currencies in markets such as Australia, China and the European Union, which feed large numbers of tourists into Los Angeles.

“We have a strong U.S. dollar that is making travel to the U.S. more expensive,” said Kathy Smits, vice president of international tourism for the Los Angeles Tourism and Convention Board. “When I returned from Australia last (month), that was the issue that came up the most with our travel industry partners there.”

As a result, the board is revising its forecast. In June, the board had forecast a 2019 growth rate of 1.7% for international visitors to L.A. County. The revision could result in a lower forecast for the year.

“value-added” packages to lure more travelers to the region. “We are seeking to put more good deals in play for travelers,” Smits said.

She added that visa processing issues have also had an impact on international passengers arriving at LAX, especially for Chinese and Indian citizens. “We’re seeing much higher rejection rates for visas,” Smits said.

She added that the tourism board has also been closely watching the turmoil surrounding the British exit from the European Union. “That issue, and all the resulting political turmoil, has been of such concern in Britain that our contacts there indicate it appears to have cut into the willingness of many in Britain to travel abroad.”

LAWA’s Erbacci pointed to another reason for the drop in passenger growth rates at LAX — fewer flights.

“We saw earlier this year cutbacks among airlines in their flights to and from Mexico,” he said. “It appears that market was oversaturated, and the airlines cut the number of flights to increase their load factors.”

When flights are full, it can impact the willingness of some discretionary travelers to fly to those destinations, he said. Seats are harder to get, and attractive pricing deals are often harder to come by.

But, he said, in recent weeks, there haven’t been as many flight cutbacks to Mexico. “The situation has abated somewhat.”

Domestically, the March grounding of Boeing’s 737 MAX planes following two crashes also reduced the number of flights, especially in the spring and early summer. “This led to a slowing of the domestic passenger growth rate. It grew, but just not as much as in previous years,” Erbacci said.

In the last few months, airlines have adjusted, and there haven’t been as many cancellations, he added.

Both LAWA’s Erbacci and the tourism board’s Smits said most of these factors are temporary, and passenger growth at LAX should soon return to more robust levels.

“We see this as an anomaly for this year,” Erbacci said. “In fact, in some of the markets where we saw downward trends earlier this year, those trends have already begun to reverse themselves, such as with Mexico.”

Both said the intensifying construction at LAX has had little impact on the slowing passenger growth rates.

In the past, airport officials have indicated that there were limits on the number of gates available to airlines at the terminals, forcing carriers to turn to remote gates or limit their growth at the airport.

This has been part of the rationale for the midfield concourse now under construction behind the Tom Bradley International Terminal and two terminal additions.

“We are continuing to transform this airport — continuing to add gates and to make our facility better for passengers and for airlines,” Erbacci said. “That’s the aim of the $14 billion modernization.”