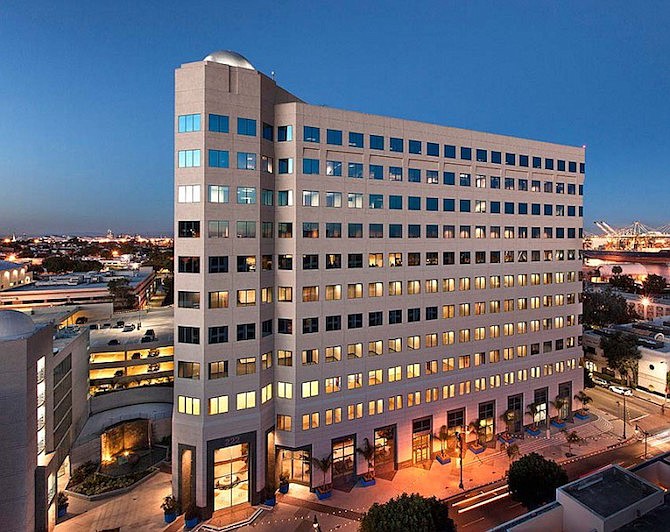 The roughly 293,000-square-foot office building is located at 222 W. 6th St. There is an adjacent seven-story parking structure and roughly 13,000 square feet of retail space.

The building was constructed in 1990 and was occupied by defense contractor Logicon Inc. The company was later acquired by Northrop Grumman Corp., which vacated the building in 2010.

“Downtown San Pedro and the Los Angeles waterfront are undergoing a major transformation into a true live/work/play destination with major projects in various stages of construction. All of the new development, along with many new walkable restaurants, breweries and retail amenities, bodes well for Topaz as it’s the only true Class A office building in San Pedro,” Shannon said in a statement.

“Topaz also has significant development upside due to the potential to redevelop a portion of the property into a residential use as well as air rights over the existing parking structure,” Schumacher said in a statement. “The redevelopment value is further enhanced due to its location within a Qualified Opportunity Zone providing substantial tax savings on the capital gains.”

This isn’t the only building with aerospace ties to get a new life in recent years. Buildings once occupied by aerospace companies have sold as supply chain shifts and moves toward automation have reduced the need for space.

This year, Boeing sold a 90-acre C-17 manufacturing plant in Long Beach for more than $200 million. The aerospace giant is also moving out of an El Segundo office building it leased, which sold this summer for $51 million.

Northrop Grumman is also moving out of the 101 Continental Blvd. building in El Segundo, which TA Realty purchased from Vereit Inc. for $138.5 million.