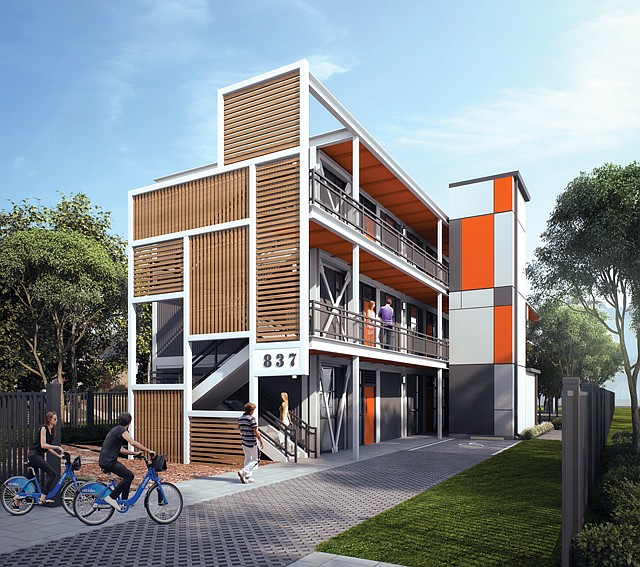 Outside the Box: A rendering of the modular housing developed by FlyawayHomes at 837 West 82nd St.

In an effort to mitigate L.A.’s substantial homelessness issue, nonprofits and developers are working to build more permanent supportive housing to get people off the streets.

One such group is Arlington Heights-based FlyawayHomes, which was founded three years ago and has a handful of projects underway around the county.

Its second project is on 82nd Street, also in South L.A. The foundation for the site has been poured, and the project will be completed in the next few months.

FlyawayHomes is in escrow on one additional site and is looking at a handful of others.

“The only way we are going to be able to solve the homeless situation in Los Angeles is to get more housing on the ground faster and cheaper,” said Michael Parks, chief executive of FlyawayHomes.

The group is trying to get 20,000 people into permanent supportive housing by 2028. In the next 28-30 months, FlyawayHomes is expecting to complete 200 units to house 400 people.

According to the Los Angeles Homeless Services Authority, there are nearly 60,000 people without permanent housing in the county.

Modular housing units are fabricated in an offsite factory and are usually put into place on the land by a crane. It’s not a new concept, but it’s one that seems to be growing in popularity.

Noyan Uras, chief development officer of FlyawayHomes, said there are many benefits to the modular model.

Once permitting is complete, the group can start grading the site and pouring the foundation while prefab units are being built. Installation only takes two weeks.

“That concurrent process helps our schedule tremendously,” Uras said. “With modular builds, we get more consistency and higher-quality product.”

Funding from Proposition HHH has been a big boost for FlyawayHomes. The city has awarded the group $19.5 million in HHH funds, which come from a bond measure paid for by property taxes.