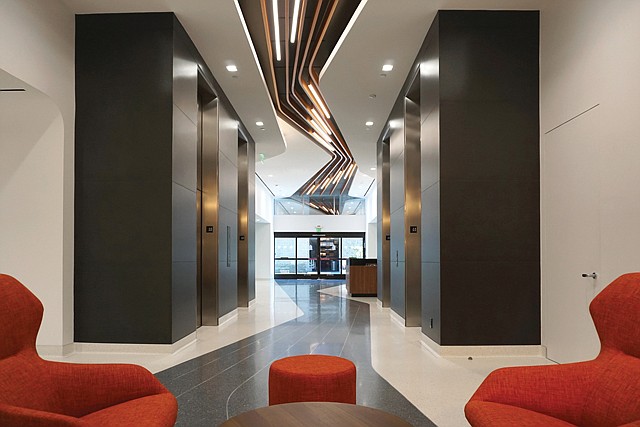 While a host of new office properties are being built around L.A., companies with existing buildings are also investing heavily to renovate older spaces.

The company recently completed a renovation at 3415 S. Sepulveda Blvd., a nearly 180,000-square-foot office tower located alongside the 405 freeway in Palms.

The building, which is adorned by a huge TrueCar sign, was updated with a modern lobby, conference center and an outdoor area for tenants.

Swig Co. has already benefited from the changes.

When the company purchased the building from Newport Beach-based KBS Realty Advisors in 2016 for $68.2 million, it was only 60% leased, according to Cory Kristoff, Swig Co.’s senior vice president of asset management overseeing Southern California. The building is now 90% leased.

“We considered it a value-add asset,” Kristoff said of the purchase. “It’s a whole different building at this point.”

She added that the building had been accomplishing its goal “to increase our occupancy and raise our rates.”

Many of the renovations, Kristoff added, were made to cater to creative tech tenants that are flocking to the Westside.