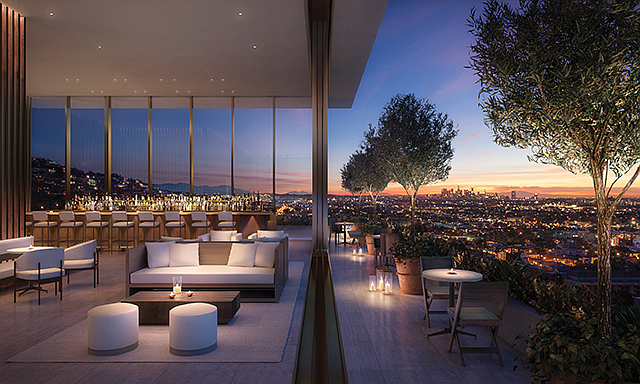 Rooms with a View: The West Hollywood Edition hotel will also include 20 condo units.

Developers are betting big on the Sunset Strip, known for its famous bars, clubs, restaurants and music venues.

A number of hotels are rising on the strip, including the West Hollywood Edition hotel and residences, scheduled to open in September. The project recently received a $300 million floating-rate loan from Deutsche Bank and Mirae Asset Daewoo Co. Ltd.

development will have a 190-room hotel and 20 condo units, as well as meeting and event space.

West Hollywood Edition hotel and residences is one of several hotels planned for the area. Charles Co. has proposed a 237-room hotel at 9034 Sunset Blvd. Silver Creek Development Co. is planning a building with a 115-room hotel and a revamped Viper Room. And Combined Properties Inc. and AECOM Capital are working on the Pendry West Hollywood, which will have a 149-room hotel.

The hotels are looking to take advantage of the area’s tourism boom. In the 2017-2018 fiscal year, West Hollywood saw 3.59 million visitors who spent $1.73 billion, according to the West Hollywood Travel and Tourism Board.