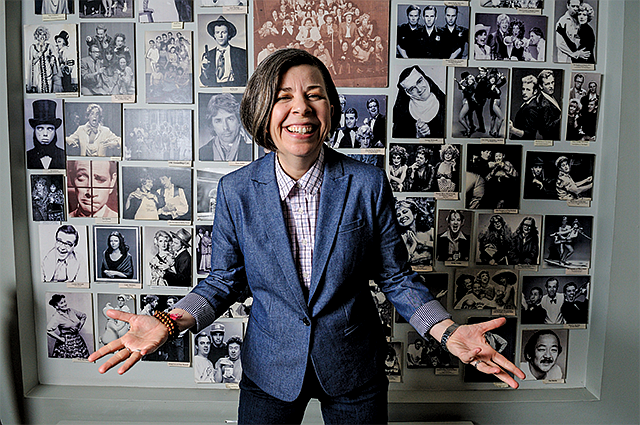 Laugh Factory: De Michele loves the fact that “we are always creating.”

Heather de Michele, managing director of the Groundlings Theatre and School, only has to mention one important fact to let aspiring performers know The Groundlings is the Harvard of comedy.

“We have a direct line to ‘Saturday Night Live,’” De Michele said proudly during a recent Business Journal visit to Groundlings headquarters in the Fairfax District. “‘SNL’ comes and scouts all the time. They (have been) part of the fabric of who we are for ages.”

Founded in 1974, the Groundlings has occupied its Melrose Avenue theater space since 1975. A new home for the Groundlings School, located just east of the theater and across the street, opened its doors in 2016.

De Michele, who has served as Groundlings general manager since 2010, said the Groundlings feeds the “SNL” machine because it calls on performers to create unique characters — a fact she believes differentiates the Groundlings from the local improv competition, Second City Hollywood and Upright Citizens Brigade.

And it’s good practice — not just for careers in comedy. Improv skills are more in demand than ever for casting directors across the board, she said. “They want to see your improv chops; they want to see how you can take a script and elevate it, and bring to it something that’s not even there. There is an expectation of the actor that has evolved in our favor over the years.”

Even businesses are getting into improv. The Groundlings at Work program offers customized shows and workshops that have become a popular team-building activity at many companies.

De Michele, a theater and film director whose credits include the off-Broadway production of “Shaheed: The Dream and Death of Benazir Bhutto” and the feature film “As Good As You,” admitted when she walked into her job on the first day — with 30 Groundling members serving as the institution’s collective artistic director — she was a bit overwhelmed. Like an improv sketch, somehow everything came together, she said.

The Groundlings Theater and School has an annual operating budget of $2.5 million. The school trains about 8,000 students a year and represents about 75% of the school’s business. Improv training for business and corporate clients represents about 15% of that total.

Whether it’s in the name of serving a corporate executive or “SNL”’s next breakout star, De Michele thrives on improv energy. “I love that every day I get to say, ‘I’m going to the theater, not going to an office,’” she said.

“We are always creating. There is always something around you that’s brimming with possibility.”

De Michele said she wants the energy of her office space to match the energy of improv. The space is filled with her friends’ original artwork, show posters and thriving succulent plants. A Pee-wee Herman doll, which was there when she moved in, cements her friendship with Pee-wee portrayer Paul Reubens, she said.

“I love to have coffee and color and some things that are alive,” she said.

CORRECTION: An earlier version of this story misstated the number of students at the Groundlings Theatre and School. It has 8,000 students. It also misstated the year Groundlings was founded. The group started in 1974.