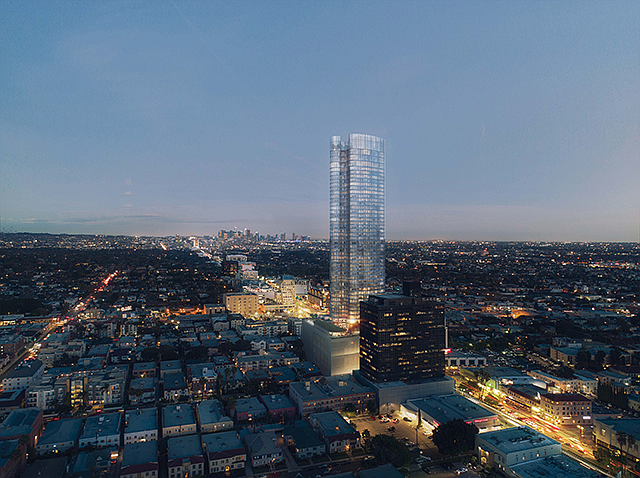 The tower will have 371 apartments, including 56 low-income units. It will be an amenity-heavy project with an outdoor deck, dog exercise area, two pools, gym, bowling alley, gaming room, golf stimulator and yoga studio.

It is being designed in the Art Deco style.

“Miracle Mile is the heart of the Art Deco district in Los Angeles,” project architect Richard Keating said. “There’s a lot of concern about new buildings interrupting that heritage.”

Keating, who has worked on other prominent buildings in L.A. including the Gas Company Tower and Beverly West, said he was “utilizing some of the language” of Art Deco and surrounding buildings for the new tower.

The site is near the La Brea Avenue subway station, scheduled to open in 2023, which is also when the tower is expected to open.

It isn’t the only new housing development planned for the area. Veteran developer Jerry Snyder has started construction on the nearby Wilshire Curson. When completed, the building will have 285 apartments.

It is designed by MVE and Partners Inc. and will have a rooftop bar, pool, gym and lounges. It is replacing a parking lot.

It’s also a busy time for office buildings in Miracle Mile. During the first quarter, office vacancy rates were 16.9%, down from 19% the previous quarter, according to data from Jones Lang Lasalle Inc. And Onni Group of Cos. Ltd. has a deal in the works to buy the 1-million-square-foot Wilshire Courtyard from Tishman Speyer Properties for $630 million.

The Academy Museum of Motion Pictures, also on Wilshire, is set to open later this year.

And the Los Angeles County Museum of Art is planning a $600 million redesign that is being guided by Swiss architect Peter Zumthor. Skidmore Owings & Merrill is the collaborating architecture firm and Pasadena-based Aurora Development Inc. is the project management firm. Clark Construction Group is the contractor for the project.