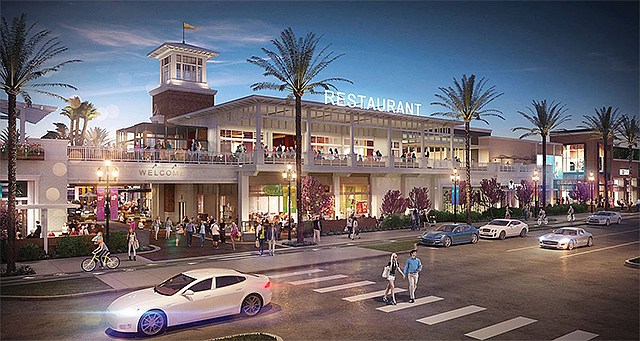 The 220,000-square-foot retail complex at site of the former SeaPort Marina Hotel is slated to open this fall after more than two decades of failed attempts by the owner to redevelop the site.

Named after its location near the intersection of 2nd Street and Pacific Coast Highway, the plaza sits at the one of the city’s busiest intersections and the main thoroughfare between Orange County’s Seal Beach and East Long Beach.

The 11-acre property was purchased in the 1990s by the Lin family, doing business as Taki Sun, who launched several failed efforts to build a multiuse complex there. That development’s size and proposed use, which included residential units, would have required a change in zoning. Opposition from neighbors including the Los Cerritos Wetlands Land Trust ultimately doomed those efforts.

Shifting to a purely retail development helped the project to move forward this time around.

An estimated 329,000 square feet of retail construction is expected to come online in the Long Beach and South Bay areas in 2019, including the 2nd & PCH complex, according to a report from real estate brokerage Marcus & Millichap Inc. Retail properties in Long Beach and South Bay have slightly higher vacancy rates than the overall metropolitan area, the Marcus & Millichap retail report found, but 2nd & PCH could be an exception thanks to its higher-end design.

“Retailer demand for high-quality space appears to exist, as the property was nearly fully leased entering the second quarter,” researchers wrote in the Marcus & Millichap report.