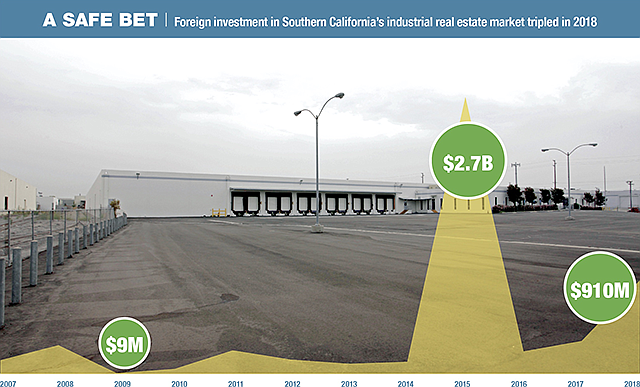 Foreign Attraction: Singapore-based Global Logistic Properties purchased a warehouse in the City of Industry for $29.4 million.

According to a report by CBRE Group Inc. and Real Capital Analytics Inc., foreign investment in industrial assets in Los Angeles, Orange County and the Inland Empire nearly tripled in 2018 from the year prior.

The region’s industrial real estate market notched $910 million in foreign investment last year, or 6.3% of all foreign investment in the U.S. market in 2018 — the most of any region in the United States. The investments amount to a 100-fold increase from the $9 million low seen during the Great Recession in 2009.

“It has been the highest or second highest product in demand for the last couple years primarily because there’s been significant rental value increases,” said Kurt Strasmann, an executive managing director at CBRE.

Much of the growth in industrial demand is due to the rising popularity of ecommerce and promises retailers are making for speedier deliveries. To meet those promises, products have to be stocked closer to population centers.

“We’re a consumer-based economy out here,” Zorn said. “Most of the industrial space is queued for or around distribution warehousing, fulfillment, ecommerce and transportation.”

That means available warehouse space in urban areas is getting scarcer, which drives up values and rents, Strasmann added. “Ecommerce has just exasperated the situation (from) a scarcity standpoint,” he said.

Trade-heavy SoCal is a safe bet

The Los Angeles market is among the most attractive to foreign investors because of its access to some of the continent’s busiest seaports, five airports and a variety of consumer and distribution businesses, Strasmann said.

L.A. is a “safe haven,” for foreign investment, he said. “It’s a great place to do business, and it’s proven to be extremely profitable.”

The fact that it can take at least two years for new development to get approved and built in Southern California is another factor that makes the market attractive to investors, Zorn said.

Still, he said warehouses are seen as such a strong, safe investment right now that some investors are shifting funding from other opportunities to invest in the industrial market.

“Investors are allocating more of the pie to industrial real estate and out of some of the slower growing areas like office and retail,” Zorn said.