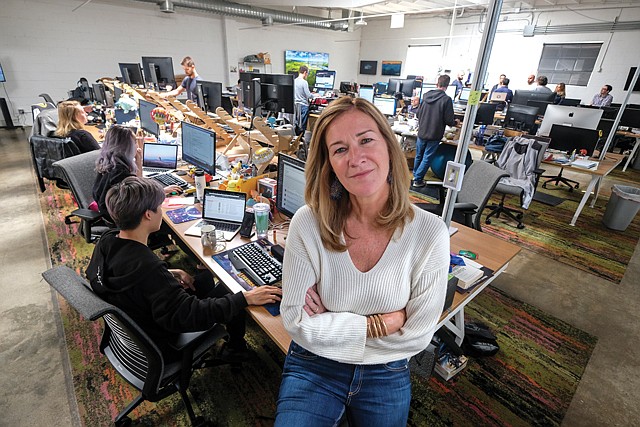 Just over two months ago, Santa Monica-based Super League Gaming Inc. went public, becoming what appears to be the first company focused exclusively on competitive video-game play, or esports, to launch an IPO.

Super League, now listed on Nasdaq, is poised to take advantage of the growing esports market, with a long-term revenue strategy focused on consumer subscriptions. But the small company, led by Chief Executive Ann Hand, is also burning through money.

Super League generated just over $1 million in 2018 revenue, according to a Feb. 22 filing with the Securities and Exchange Commission, but posted a $20.6 million net loss, listing $16.5 million in operating expenses.

In its initial public offering, the company raised $22.4 million selling shares at $11 each, but since then its stock price has sagged, reaching $6.36 a share at close of business on May 1.

As the first company of its kind to go public, Super League’s fate could provide insight for other upstarts in the fast-growing esports field — a hybrid of the video game and professional sports industries.

Many successful esports operations are arms of video-game publishers or subsidiaries of larger entertainment or technology companies. Analysts say it could be years before Super League turns a profit.

In the SEC filing, Super League said it would need either a substantial jump in revenue or to borrow significantly to continue as a company past February 2020.

“They can keep it up as long as investors are willing to finance the cash burn,” said Michael Pachter, managing director of equity research at Wedbush Securities Inc. “But equity investors have an expectation of profit and will seek to understand how Super League can grow revenues to cover its expenses.”

Other young Silicon Beach companies, most famously Snap Inc., have also posted large losses after going public. But as a smaller company, Super League has even more to prove.

Super League was founded in 2015 with the aim of making esports appealing to a wider audience.

Super League tries to offer alternatives to the “toxic chat” that is often prevalent in online game play, said Hand, who is also chairwoman of Super League. The company’s approximately 300,000 registered users include children, teenagers and adults.

“We promote sportsmanship,” Hand said. “This is the more positive way to game.”

Super League bought the licensing rights to two of the most popular esports games — Riot Games Inc.’s “League of Legends” and Microsoft Corp.’s “Minecraft” — and started organizing tournaments online and at physical locations. It contracted with movie theater chains including Cinemark USA Inc., which was also an early Super League investor, as tournament locales.

The company has also added venue partnerships including with Topgolf International Inc., a combined driving range, bar and gaming center.

Super League’s physical tournaments have expanded. On April 27, Super League hosted a “League of Legends” competition between the best amateur players of select cities at the Red Bull Training Grounds, an esports arena in Santa Monica.

The future of esports

Global revenue in esports is projected to more than double to $1.8 billion by 2022, from $865 million in 2018, according to Amsterdam-based market research firm Newszoo.

Jurre Pannekeet, an analyst with Newszoo, said the principal beneficiaries of this growth will be game publishers — such as Riot Games and Activision Blizzard Inc., both based in Santa Monica — followed by broadcasting platform Twitch, an Amazon.com Inc. subsidiary. And professional leagues will generate money from selling broadcasting rights.

It’s unclear if esports is a rising tide that will lift Super League’s boat, Pannekeet said.

“There is certainly a demand for Super League,” Pannekeet said, adding that amateur competitors are “looking for a more curated experience.”

Hand said the central driver of future success for Super League could come from fees paid by the players who use the company’s platform. Hand said she wants consumer fees to overtake brand sponsorships as the top revenue source.

Super League is planning to launch a membership service for its online tournaments later this year, with subscribers paying about $5 per month. Super League also plans to charge gamers to play at venues.

As the company and the industry grow, Hand anticipates more favorable deal terms with the physical venues where Super League holds its tournaments and more marketing exposure by prominent licensors such as Riot Games.

Hand added that Super League caters to a broader audience than Play VS or Skillz.

“We’ve shown value to the publishers in introducing people to the game and retaining players,” she said.

A former marketing executive at BP, Hand in many ways personifies how esports has moved into the mainstream. She joined Super League a few months after its launch, moving to Los Angeles from San Francisco where she was working as chief executive of Project Frog Inc., a company that sells parts for energy efficient buildings.

“You don’t have to be the user to know who the user is,” she said. “I sold motor oil for a long time, and I don’t know how to change my oil.”

Still, Hand said she had doubts about jumping into esports. But her initial experiences have changed her mind. She said she’s seen “a good and healthy mix of male and female gamers of various ages,” plus a “collegial warmth” from the male-dominated world of esports entrepreneurs.