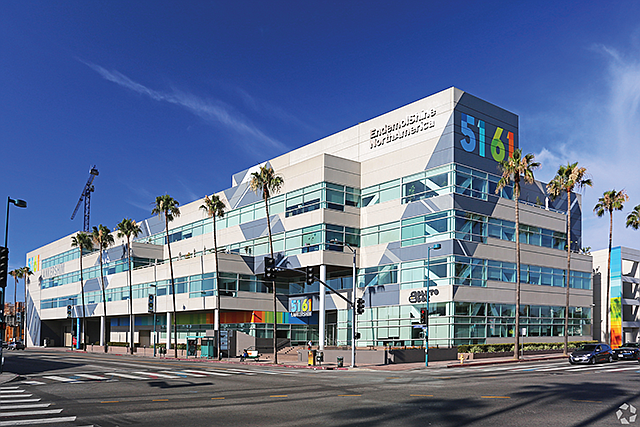 WeWork Cos. Inc. is adding two more L.A. locations as the co-working giant gains traction around the county.

WeWork signed leases on the new office spaces, which are located in North Hollywood and the Arts District. Terms of the leases were not disclosed.

The 40,000-square-foot North Hollywood location, at 5161 Lankershim Blvd., can house roughly 570 people and is slated to open in the summer. The property is owned by Beacon Capital Partners with Jones Lang LaSalle Inc. acting as the leasing agent.

The average asking rent for Class A offices during the fourth quarter of 2018 in the San Fernando Valley was $2.78 a square foot, according to JLL data, putting the value of the lease at roughly $1.3 million a year.

WeWork will also take 55,000 square feet at The Maxwell in the Arts District, located at 1019 E. 4th Place. The location is expected to open in the fall and can house roughly 960 individuals.

The company already has downtown locations at the Fine Arts Building at 811 W. 7th St. and the Gas Company Tower at 555 W. 5th St. Earlier this year, WeWork announced plans for another 78,000-square-foot location at 1031 S. Broadway, in a building known as the Western Pacific.

The Maxwell, which was built in 1924, was formerly called the Maxwell Coffee Building. Hudson Pacific Properties Inc., the building’s owner, is overhauling the property to create a five-story creative office complex. CBRE Group Inc. is the leasing agent for the development.

The average asking rate for Class A office space in downtown during the fourth quarter was $3.70 a square foot, putting the value of WeWork’s lease at roughly $2.4 million a year.

Glendale-based ServiceTitan Inc. is expanding its headquarters, leasing 125,000 square feet in a building across the street from its current home.

Beacon Capital Partners, owner of the building at 800 N. Brand Blvd., announced the deal March 26. Terms of the lease were not disclosed.

Ara Mahdessian, ServiceTitan’s co-founder and chief executive, said the company has more than 600 employees and has plans to grow in 2019.

“This is a welcome partnership with Beacon to create a new dynamic office environment to support our growth,” Mahdessian said in a statement.

In November, the company raised $165 million in Series D Funding.

The average asking rent in Class A office buildings during the fourth quarter of 2018 in Glendale was $3.05 per square foot, according to JLL data, putting the value of the lease at roughly $4.6 million a year.

Adaptive Modular Solutions Inc. has changed its name to Crate Modular Inc. to better highlight the work it does in designing and building multifamily housing and school buildings out of containers.

The company also announced that it hired Amanda Gattenby as the group’s vice president of development. Gattenby has 15 years of experience in the industry, and has overseen construction and development of more than 1,200 units and 90,000 square feet of commercial space in Southern California and Arizona.

Lisa Sharpe will stay on as the company’s president. “Our new name and brand reflect the best parts of our combined company’s DNA,” Sharpe said in a statement.

Last year, the company acquired GrowthPoint Structures, another manufacturer of shipping container-based buildings. Crate said that in the coming year, it plans to build and install 100,000 square feet of projects.

As the population ages, the demand for senior housing increases.

The Villa Raintree Apartments, at 11905 Ferris Road, was built in 1978. All of its apartments are one-bedroom units.

The complex has a less than 2 percent vacancy rate historically, according to Marcus & Millichap, and has a seven-year waiting list for Section 8 tenants.