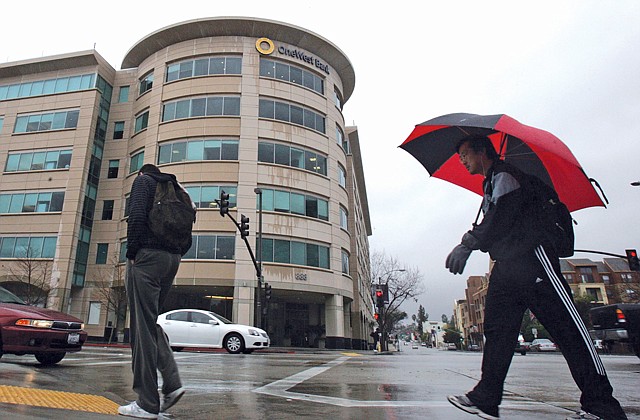 Trend to Watch: OneWest Bank was one of several L.A. banks to see nonperforming loans rise in 2018.

Some commercial banks in the Los Angeles region saw a noticeable uptick in troubled loans on their books during the latter half of 2018 — a trend that has raised concerns among some banking analysts.

Data compiled by S&P Global Market Intelligence Inc. for the Business Journal shows a growing percentage and volume of nonperforming loans at several banks in the Los Angeles region when tracked over the one-year period ending Dec. 31.

The banks include Preferred Bank, which saw a 590 percent rise in troubled assets to $44.8 million over that period. Pasadena-based OneWest Bank, a unit of CIT Group Inc., of New York, saw a 7.9 percent jump to $307.4 million. And Koreatown’s Hope Bancorp Inc., parent of the $15.3 billion-in-asset Bank of Hope, saw nonperforming loans rise 18.5 percent to $131.8 million.

Commercial loans are considered nonperforming if the debtor has made zero payments of interest or principal within 90 days or is 90 days past due. Nonperforming loans can eventually slip into default.

With real estate debt on the rise and additional interest rate hikes possible, some analysts are concerned borrowers could have more trouble getting out of debt, leading potentially to broader economic impacts.

Analysts and bankers attributed last year’s uptick in troubled assets to inflation and rising interest rates over the past two years, along with widespread uncertainty surrounding U.S. trade negotiations with China.

“We’ve seen some indications where the cumulative effect is posing some strain on some borrowers, both consumer as well as commercial,” said Greg McBride, chief financial analyst with Bankrate, a consumer financial services company based in New York.

Some local banks — all of which are flush with profits — have begun setting aside greater sums of money to cover potential losses on nonperforming loans made against commercial and industrial properties. Those properties include luxury condominiums in New York and Las Vegas, as well as construction and development projects.

The set-asides, known as loan loss provisions, are meant to cover for uncollected loans and loan payments.

The uptick in loan loss provisions cropped up in the last half of 2018, according to a review of some local bank balance sheets, and confirmed by banking experts.

Those experts view these balance sheet blemishes as a kind of canary in a coal mine, warning of potential dangers ahead — though they’re not a certain way of predicting future performance.

“My bottom line is that there are more caution lights flashing,” said Bert Ely, an Alexandria, Va.-based analyst who, for decades, has sounded the alarms on financial institutions during tough economic times. “By the time the numbers start to show some strong patterns, the damage has already been done, and the bad loans are already on the books.”

Ely said potential lending problems are more likely to crop up initially with apartment buildings or condominium properties because borrowers tend to pay higher interest rates and are more likely to default, rather than on owner-occupied commercial real estate, such as offices, retail and industrial buildings.

In one example, the $4.2 billion-in-asset Preferred Bank made a sizeable provision for a loan loss of $5.6 million in the fourth quarter of last year — nearly triple the $1.9 million provision it took in the third quarter. The increase was tied to a nearly $22 million mortgage on a luxury condominium property in New York owned by Michael Paul Enterprises, at 184 E. 64th St., according to bankruptcy documents.

Set-asides can sometimes be wiped off the books if a particular loan is restored or a property or commercial loan is purchased by another party. For example, Preferred Bank also reported a $2 million gain on a condo sale in Las Vegas following the resolution of a lawsuit with the homeowners association. That transaction reversed a loan loss provision on the bank’s balance sheet after the condo was sold, according to Edward Czajka, Preferred Bank’s chief financial officer.

Czajka said many banks — including Preferred — have reversed loan loss provisions following the Great Recession as the economy healed but now are putting more aside. He said the set-asides were not predicated by a softening economy but were instead a product of a new accounting standard that is slated to go into effect in 2020.

“Suffice to say, not a lot of bankers are happy,” he said.

Banking experts say the higher loan loss provisions in the last half of 2018 are worrisome because of a bigger trend emerging nationwide: rising real estate debt levels. The Mortgage Bankers Association, a trade group that tracks lending trends, reported earlier this month that the level of commercial and multifamily mortgage debt outstanding grew by 6.8 percent, or $216 billion, to $3.4 trillion in 2018.

“I’ve been very bearish on the economy. I thought there would be a recession in 2019. The only reason I revised my thinking was that the (Federal Reserve) paused raising rates,” said Mayra Rodriguez Valladares, managing principal of MRV Associates, a New York-based capital markets and financial regulatory consulting and training firm. “I know when rates tick up again, companies won’t be able to pay all of their debt. The biggest concern is the debt level.”

“You can hide your loans when there’s a good economy,” Rodriguez Valladares said. “But dirt always comes out in a recession.”

Community banks in L.A. County that saw a rise in nonperforming loans over the latter half of 2018.

Pacific Western Bank The $25.7 billion-in-asset institution reported that provisions nudged slightly higher to $12 million in the fourth quarter from $11.5 million in the third quarter.

Hanmi Bank The bank, with $5.5 billion in assets, reported that its provision for nonperforming loans grew to $3 million in the final three months of 2018, versus $200,000 in the third quarter.

Open Bank The unit of downtown-based OP Bancorp, with more than $1 billion in assets, saw nonperforming loans grow to $1.9 million in the fourth quarter from $1.2 million in the third quarter.