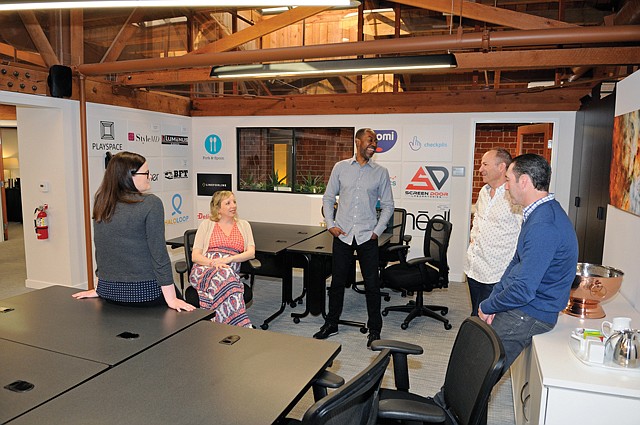 Several law firms in Los Angeles have created venture capital outfits that invest in early stage startups and offer legal advice in exchange for equity stakes in the companies.

These offshoots at firms such as Stubbs Alderton & Markiles and Manatt Phelps & Phillips are not necessarily huge revenue generators, lawyers at the firms said. But the venture capital initiatives — as well as accelerator and incubator programs tied to the operations — offer access to a pool of new clients, and relationships formed with executives at startups can lead to a steady billing stream down the line.

“The benefit of us running an accelerator is we’re developing relationships early on with early stage companies and grow with them until they get to later stage financing and mergers and acquisitions, and that’s where we’ll make money on the back end,” said Heidi Hubbeling, chief operating officer of Stubbs Alderton’s startup accelerator. “We get new clients for the long term; it’s a good marketing opportunity for the company.”

Companies selected for the six-month program get a $25,000 credit toward Stubbs Alderton & Markiles’ legal services, access to the law firm’s network of more than 100 mentors, and $25,000 in cash. In some cases, the startups are invited to remain in the program for an additional three months. Stubbs Alderton takes 7 percent of participating companies’ unrestricted common stock in exchange.

Law firms spinning off venture capital arms and providing accelerator programs has been a trend for almost two decades.

Sawtelle-based law firm Manatt Phelps & Phillips founded its Manatt Venture Fund in 2000 to “provide an alternative stream of revenue to the firm and strengthen our relationships with venture capital, startup and technology communities,” the firm’s Chief Executive and Managing Partner William Quicksilver said in an email.

The venture arm is funded exclusively by partner capital.

Manatt Venture Fund is led by Lisa Suennen, who was appointed in November 2018.

Manatt declined to disclose specifics on its clients and funding, though Quicksilver said it prioritizes seed and early stage investments.

Stubbs Alderton created its first venture outfit in 2003, which was dubbed SAM Venture Partners. The fund was seeded with money from firm partners and offers legal services in exchange for equity in startup companies, according to the law firm’s co-founder Scott Alderton. The fund is a separate entity from the firm, with Alderton running day-to-day operations.

Hubbeling confirmed Ring was a client of Stubbs Alderton prior to its April 2018 acquisition by Amazon.com Inc. Similarly, Skype was also a client until acquired by Microsoft Corp. in October 2011.

Stubbs Alderton also has a second venture partner SAM Creatv Ventures, which was founded in 2017 by Creatv Media founder Peter Csathy and contributes between $25,000 and $500,000 to early stage startups. SAM Creatv Ventures also invites outside investors to put money into the fund, in contrast to SAM Venture Partners, which only allows capital contributions from the law firm’s partnership.

“Our unique investment thesis is we go for highly pedigreed deals with investors we trust, and we can actively help them move forward and grow,” Csathy, who formerly was chief executive of Manatt’s venture fund, said.

Not everyone is a fan of law firms taking equity in companies that they also do legal work for, however.

While venture outfits run by law firms are set up as separate entities, there’s some debate about whether there’s an inherent conflict of interest in the arrangement.

Jennifer Post, a securities lawyer at Thompson Coburn who works with early stage companies, said it could be difficult to separate the client’s interest from the law firm’s when there’s an equity stake involved.

Thompson Coburn does not take equity in client companies in exchange for legal services, she said.

Post said that while the arrangement firms such as Stubbs Alderton and Manatt have is legal, the practice remains ethically divisive in the legal community.

“Clients can knowingly enter into these agreements; it’s within the law, but there is an outstanding question if the law firm can be objective when advising the client,” she said.

At the heart of the issue is whether offering equity for legal services is in the best interest for early stage companies whose share valuation could skyrocket, something Alderton admitted was a question that startups should consider.

“We tell the client, you might think you’re saving money paying in equity because you don’t have to write a check, but if you believe in your own vision, that’s the most expensive currency you can pay us with,” he said.

Abner Flores, founder & chief executive of Santa Monica-based Checkplis Inc., a digital check platform for restaurants that was part of Stubbs Alderton’s 2018 accelerator class, said the equity tradeoff was worth it for the expertise and connections the firm brought to the table.

“One of the benefits is that it’s attached to the law firm, so you can get advice from the lawyers themselves on things you need to know about legal stuff, or even connections — the law firm has a lot of connections in the tech industry because they are well connected to other mentors and chief executives,” Flores said. “If you don’t have them around, it’s really difficult to get that counseling.”