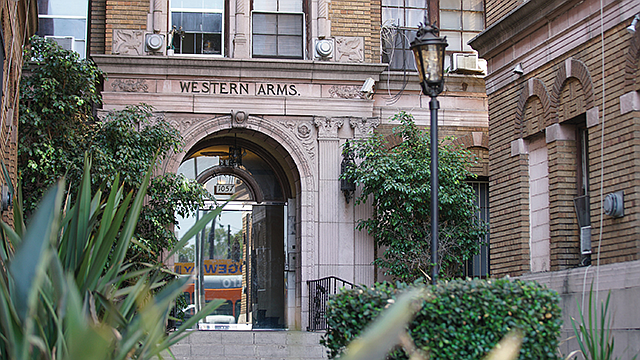 Multifamily properties in Koreatown are hot.

The Western Arms, a 76-unit, 4-story apartment building at the corner of S. Western Ave. and W. 11th St., sold for $12.6 million to Carson-based Texollini Inc.’s 1057 S Western LLC, which took the building’s address as its moniker. The building has one-bedroom and studio apartments.

Lee & Associates announced the deal on March 1. The brokerage’s Cory Stehr and Cole Martens represented the buyer and the seller, San Francisco-based Prana Investments Inc., in the transaction.

“All the new multifamily development underway in Koreatown has raised the threshold for rental rates and made this building among the most affordable in the area,” Martens said in a statement. Demand is on the rise for more modest apartment units, he said, “especially among younger tenants who are prioritizing an active lifestyle over expensive, luxury apartments.”

Prana Investments purchased Western Arms as part of a three-building portfolio in 2015 for $16.6 million.

Other multifamily property development is on the rise in the Koreatown submarket. Koreatown-based Jamison has filed plans for a 157-unit apartment with 12,000 square feet of commercial space at 744, 752 and 762 S. Serrano Ave. Jamison has also filed plans, with mid-Wilshire-based Hankey Investment Co., to build 490 residential units at 200 N. Vermont Ave. The two recently broke ground on a $300 million complex at 2900 Wilshire Blvd. with 644 residences. Jamison is also working on a 160-unit building at 700 S. Manhattan Place.

In an effort to strengthen its brand as a purely commercial property company, Sawtelle-based Westmac Commercial Brokerage Co. has changed its name back from Coldwell Banker Commercial, Westmac.

After nearly 19 years, Westmac will no longer be affiliated with the national Coldwell Banker Commercial brand. Westmac has been independently owned and operated since 2000.

“We think we can better serve our clients as an independent (brokerage),” Macker said, adding that a lot of the company’s clients “appreciate a boutique brokerage company.”

Westmac was founded in 1988. Working primarily with Westside tenants, property owners, buyers and sellers, it has sold more than 700 properties and leased more than 800.

Santa Fe Springs-based HVAC manufacturer T.A. Industries Inc., which does business as Truaire, is consolidating its operations from two locations to one, signing a lease for a nearly 240,000-square-foot industrial building in its hometown.

T.A. Industries will move into the new site, located at 11130-11290 Bloomfield Ave., in the next few months. The value of the five-year lease was not disclosed.

The new location will house the company’s headquarters and the combined distribution operations of its two current Santa Fe Springs facilities, both of which are roughly 100,000 square feet.

The South Bay city of Hawthorne is developing fast, and its residents and businesses need a place to store all their belongings.

Enter Scottsdale-based 1784 Capital Holdings, which paid $5.8 million for a 1.3-acre site in Hawthorne it plans to turn into a self-storage facility, the company announced Feb. 25.

The new Hawthorne Self Storage, located at 3155 W. El Segundo Blvd., will house 120,510 square feet of storage space. The site will include “climate-controlled loading areas, hotel-style lobbies, conference rooms and play areas,” according to Shane Albers, chairman and chief executive of 1784 Capital Holdings.

“We are committed to enhancing the Hawthorne community with much-needed, high quality self-storage services,” Albers said in a statement. “This neighborhood is undergoing a transition. ... We are excited to be part of the renewal.”

The project is expected to be completed during the first quarter of 2020.