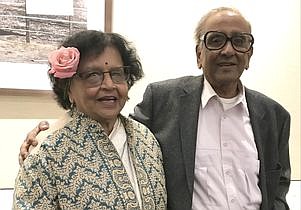 Veda and VS Varadarajan

A former math professor has donated $1 million to UCLA to bring visiting mathematics professors to the campus.

V.S. Varadarajan, who joined the UCLA faculty in 1965 and retired in 2014, specialized in the numeric theory concept of automorphic forms and in representation theory, which is related to quantum physics. At UCLA, he taught undergraduate and graduate students, managed the Pacific Journal of Mathematics and published nine books.

Upon final approval from the UCLA Academic Senate and the office of UC President Janet Napolitano, the $1 million gift will establish the Ramanujan Visiting Professorship within the mathematics department, which last year ranked in the top 10 graduate mathematics programs in the country according to rankings by U.S. News & World Report.

The gift is part of the Centennial Campaign for UCLA, which is scheduled to conclude in December. The campaign surpassed its $4.2 billion goal last summer.