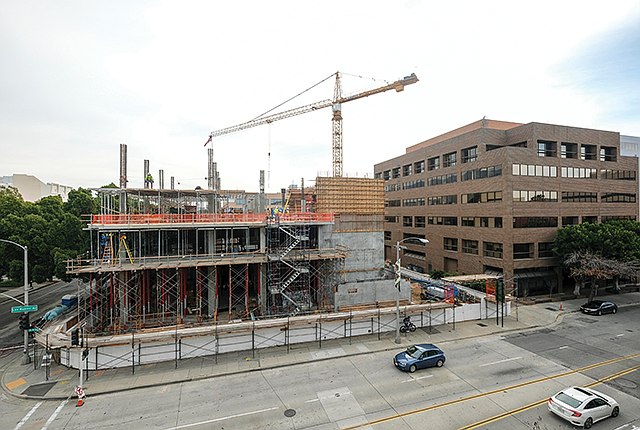 The Kaiser Permanente School of Medicine in Pasadena announced last month it will enroll its first class in the summer of 2020. Tuition for the four-year program? Free.

The health system will offer free tuition for the first five classes of students who enroll through 2024 – with a free ride for the duration of medical school.

“Our students will learn to critically examine factors that influence their patients’ health in their homes, workplaces, schools and communities – and become effective health advocates for their patients,” Mark Schuster, founding dean and chief executive of the medical school, said in a statement.

The Kaiser Permanente school announced Feb. 19 it would receive applications starting in June for its first class of 48 students. The school has a total capacity of 192 students.

Schuster said Kaiser Permanente will waive students’ $54,719 annual tuition – and more than $6,500 a year in Kaiser health plan coverage – to help lift the burden of medical school debt while encouraging graduates to pursue lower-paying practices, such as family medicine.

Funding for tuition will come from a community benefit fund set up by the nonprofit health system to maintain its tax-exempt status. The fund spent $2.3 billion in 2017 on community health and charity care for the uninsured.

The med school will be housed in an 80,000-square-foot building expected to be completed this year. The school declined to disclose its overall construction cost.

Second-year students will add obstetrics, gynecology, pediatrics, psychiatry and surgery, with other specialties to be added later.

The Kaiser Permanente teaching outpost, the first for the Oakland-based health system, would be the fourth medical school in L.A. County.

“PhRMA is here today for one reason, to help make Los Angeles a bioscience powerhouse on par with San Diego and the Bay Area and solidify California’s well-established prominence as a global life sciences leader,” said Stephen Ubl, its chief executive, in a statement made after a Feb. 19 announcement with local officials and bioscience leaders downtown.

PhRMA was the third known founding board member of the nonprofit agency officially known as Bioscience Los Angeles County, after Amgen Inc. and the county itself.

The association will contribute the $750,000 over three years. Plans call for 11 other founding sponsors to do the same.

If there’s anyone who might inspire future biotech moguls from Cal State Los Angeles, it is Michael Jung.

The UCLA scientist and creator of a blockbuster cancer drug appeared at a Cal State L.A. graduation ceremony this month for bioscience entrepreneurs.

The graduating class of Cal State LA BioStart on Feb. 13 gave Jung an LA BioStar Award for developing drugs such as Xtandi, which extends the lives of men with late-stage prostate cancer. UCLA sold its royalty rights for $1.14 billion.

The BioStart program – which includes five weeks of training in business fundamentals, financing, research and development, intellectual property, and other skills needed to start a bioscience company – has graduated nearly 60 students since it began in 2017.

“Graduates of Cal State LA BioStart learn from industry leaders, like Jung, at the top of their fields who contribute to the scientific and economic vitality of the Los Angeles region,” Jose Gomez, executive vice president for Cal State L.A. and chairman of its LA BioSpace initiative, told the assembly.

Cal State L.A.’s BioSpace initiative was launched several years ago to address a shortage of bioscience entrepreneurs and lab space for startup companies.

The El Sereno-based university plans to open in June a 20,000-square-foot bioscience innovation center that will house the BioStart training program and an incubator for startup companies.