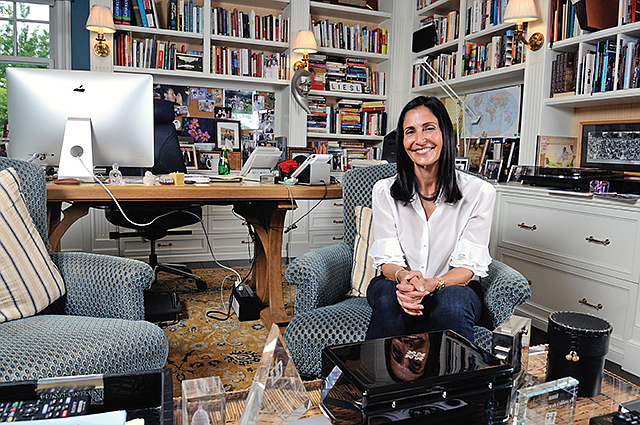 A Good Cause: Leslie Gilbert-Lurie is passionate about human rights, baseball and Ruth Bader Ginsburg.

Attorney, author and human rights advocate Leslie Gilbert-Lurie’s home office is gray-blue, but it often serves as a greenroom for guests preparing for the political fundraisers, human rights organization meetings and philanthropic events held at her Brentwood home.

Gilbert-Lurie’s guest lists are also blue — in a political sense.

“Every Democrat we are supporting wants to come by our home,” she said during a recent Business Journal visit.

Guests within the past year include Reps. Ted Lieu, D-Calif., and Joe Kennedy, D-Mass., as well as California Gov. Gavin Newsom.

The Gilbert-Lurie home also serves as a venue for meetings of the nonprofits Human Rights Watch Los Angeles Committee, which Gilbert-Lurie co-chairs, and Facing History and Ourselves, among others. Most recently, 300 people gathered for a fundraiser for Brentwood-based Vision to Learn, an initiative founded by L.A. Unified School District Superintendent Austin Beutner that provides glasses for low-income kids.

“I love the community coming together to talk about issues and get to know each other,” Gilbert-Lurie said. “We live in a big city in anxiety-filled times. I think we make people feel smarter and happier and well-fed when they come by our house.”

Gilbert-Lurie and husband, Cliff Gilbert-Lurie, senior partner at Century City-based Ziffren Brittenham, don’t draw a line between home and venue when it comes to the causes they care about. Similarly, Leslie Gilbert-Lurie never wanted to separate her career from philanthropy.

First, the UCLA School of Law graduate jettisoned her law career and spent a decade at NBC’s entertainment division as a creative executive.

After that, she decided to devote her legal mind full time to human rights advocacy, children’s issues and other causes.

She also wrote the mother-daughter memoir, “Bending Toward the Sun,” detailing the years her mother, Poland-born Rita Lurie, 82, spent hiding from the Nazis. Leslie and Rita continue speak to school groups and other organizations about Rita’s experience and its effect on the family’s next two generations of women, Leslie and daughter Mikaela.

Gilbert-Lurie acknowledged that her husband’s law career allows her a certain level of freedom. “I like to roll up my sleeves, think about policy changes, think about how organizations can operate more effectively,” Gilbert-Lurie said. “The fact that my husband likes his job and earns a good living enables me to not think about how much a job pays as much as how can I best utilize my skills.” The couple considers themselves partners in their efforts to make the world better.

Her office is crowded with memorabilia but, she said, “I think all I really need is a pad of paper and pen and a phone to do everything I want to do — and a couch for people to sit on, maybe.” She added, “I like being surrounded by photographs and books and things that make me happy.”

Her choice of business attire is usually pants — or a dress that can be stylishly paired with sensible boots. “It’s all about the shoes. I always want to be able to walk comfortably, to run when I’m late,” she said.

Just a few weeks ago, Gilbert-Lurie attended an event at a private home featuring former U.S. Sen. Barbara Boxer and House Speaker Nancy Pelosi. “And Nancy Pelosi was wearing these high heels, and I thought: ‘That’s so cool — but I can’t do it,’” Gilbert-Lurie said with a laugh.

Correction: An earlier version of this story misstated the title of Leslie Gilbert-Lurie's book. Its title is "Bending Toward the Sun."