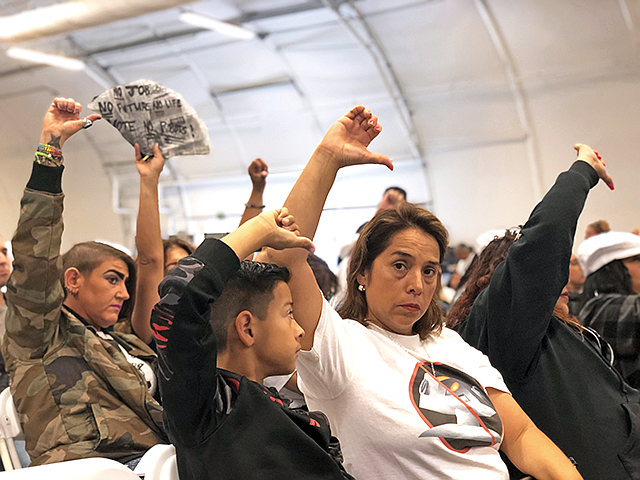 At a raucous meeting packed with aggrieved dockworkers Thursday, the Los Angeles Board of Harbor Commissioners rejected the longshore union's appeal of a development permit at the port's largest container shipping terminal, Pier 400. The permit is now slated to go before the Los Angeles City Council.

The union had opposed the permit, saying it would pave the way for automation and cost dockworker jobs.

The permit would allow APM Terminals, which runs operations at Pier 400, and its parent company Danish shipping and oil conglomerate A.P. Møller-Maersk, to install the infrastructure needed for 130 unmanned electric vehicles. The automated equipment would be used to stack container cargo and boost the terminal’s efficiency, reducing labor costs and lower emissions, the company has said.

But the International Longshore and Warehouse Union estimates it could cost 500 jobs a day on the terminal, slashing the workforce by as much as 90%. The issue has roiled the local community, where families of dockworkers go back generations.

Mayor Eric Garcetti has been overseeing negotiations between the terminal operator and the longshore union since March, but it has been slow going. The ILWU isn’t satisfied with APM’s offers for on-the-job training that would, in theory, open up new positions for dockworkers even as others are being eliminated.

The union is also pushing for statewide legislation that would turn over the authority to approve automation to state officials.

Los Angeles City Councilman Joe Buscaino, who represents communities around the port, was expected to bring a motion to block the permit at the city council meeting June 21. In the interim, Buscaino said he hoped both sides could find a path forward.

The debate is expected to rage on as more terminals and other shipping operations take up automation initiatives. Consulting firm McKinsey & Co. Inc. reported that operators planned to spend up to $15 billion in the coming years on automation.

Correction: An earlier version of this story incorrectly characterized the labor union's appeal. The appeal, which would have halted a permit paving the way for automation, was rejected by the Los Angeles Board of Harbor Commissioners.