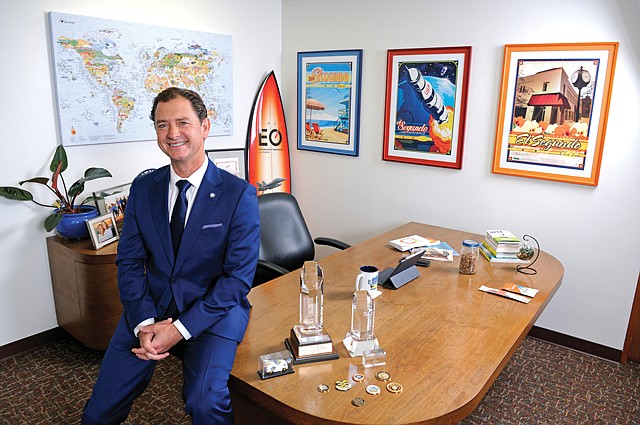 Beach Boy: El Segundo Mayor Drew Boyles balances his love for the city with his passion for surfing. Photo by Thomas Wasper

On the first and third Tuesday of the month, El Segundo residents have the chance to voice their concerns to Mayor Drew Boyles at El Segundo’s 7 p.m. City Council Meeting at City Hall. But earlier in the day, local citizens join Boyles in a more informal setting just across Main Street for a chat and a jolt of caffeine at Blue Butterfly Coffee Co. where Boyles holds the Mayor’s Coffee Open Hour on City Council days.

There, visitors also might have the chance to meet Boyles’ mom, Val Smith, who tends to drop in on the meeting. “She moved here eight years ago, from Atlanta, and she’s already more active in the community than I am, and I’ve lived here 25 years,” Boyles joked during a recent Business Journal visit to his City Hall office.

Boyles wears a suit at City Hall — sometimes without the tie to be less intimidating at City Council meetings, he said. But the avid surfer is more likely to be seen, whether at the Blue Butterfly, a civic event or a ribbon-cutting, in sandals and an aloha shirt.

Despite being a hotbed for innovative and often tech-related business, Boyles doesn’t like to see El Segundo lumped in with Silicon Beach.

“We have kind of avoided that nomenclature because that feels very Venice, Santa Monica, Culver City, West L.A.” said Boyles. “I grew up in Chicago. … El Segundo feels specifically most like the Midwest because it is so small; people bounce into each other in terms of values, pace of life, the tightness of the community.”

It’s not surprising that Boyles calls El Segundo “the most important 5 square miles in all of Southern California.”

Boyles observed that El Segundo has a population of only 17,000, but that number swells to between 80,000 and 90,000 during weekdays because of the influx of commuters who work here. “Unlike a lot of cities in L.A. County, the vast majority — over 95% — of this town’s revenue comes from commerce, whether directly or indirectly, as opposed to from property taxes,” Boyles said. “How do you govern, or at least foster balanced, responsible commercial development, with this quaint little residential neighborhood right on the other side of it? How do you keep this quasi-Mayberry feel?”

His journey included a stint in the Navy, becoming a parent at 17 and again at 19, and taking full custody of two sons by age 21. He earned an MBA at USC’s Marshall School of Business in the late 1990s. He and his wife now have a family of five kids.

“I feel like balance is cliche but having said that … I would say that I’m doing a good job of balancing my family, the city, my businesses and myself — time out to surf,” Boyles said.


“I think asking questions, pushing the status quo, (associating with) people who want to go outside their comfort zone, that’s how I live my life,” he added.