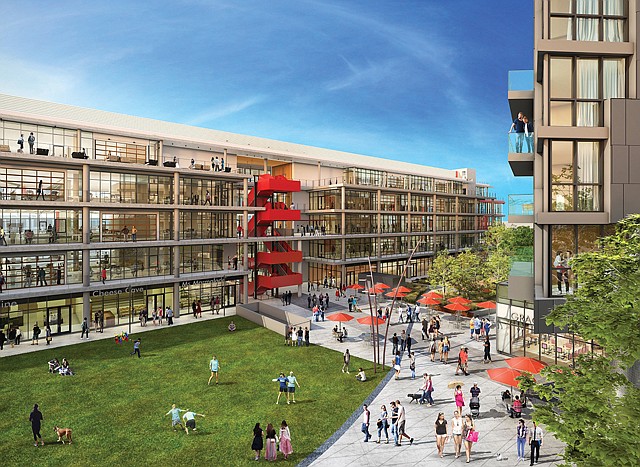 Creating Community: HBO leased a 240,000-square-foot office building at Ivy Station, which will also have apartments and a hotel.

Areas like Santa Monica and downtown have long been development hubs. In the last few years, Culver City has thrown its hat in the ring, attracting major companies like Apple Inc., Amazon.com Inc. and Google.

Now the areas surrounding those hotspots are filling in — something experts and developers attribute in part to the extension of Los Angeles County Metropolitan Transportation Authority’s Expo Line.

Lowe is working on the Ivy Station development, located conveniently close to an Expo Line Metro stop, with AECOM-Canyon Partners and Rockwood Capital. Home Box Office Inc. has leased the entire 240,000-square-foot office building at Ivy Station, which will also have 200 apartments, 50,000 square feet of ground floor retail and a 148-room hotel.

Downtown to the beach

The 15.2-mile light rail Expo Line, running from downtown to Santa Monica, opened in stages starting in 2012. And development followed.

“The Expo Line is an important connection between the ocean and downtown,” said Carl Muhlstein, international director at brokerage Jones Lang LaSalle Inc. “It’s harvesting a lot of underdeveloped areas. No one thought to pursue sites in West Adams, Crenshaw District, Baldwin Hills, and all the sudden we’re getting phone calls about sites in that area.”

Most of the projects in development along the light rail line are residential. There are more than 7,000 units under construction within a 15-minute walk of the Expo Line, according to JLL. An additional 22,633 units have been proposed for the area.

“When you have rail stops it incentivizes development both from a residential and creative office standpoint,” said Chris Beck, a senior managing director at Newmark Knight Frank.

The projects are taking advantage of the city’s Transit Oriented Community program, which offers concessions to development rules — such as reduced parking requirements — for projects built near public transportation that include affordable units.

Jennifer McElyea, senior managing partner at Watt Cos. Inc., said the group is all-in on developments near the Expo Line.

“We’ve really made a bet on the fact that transit is changing,” McElyea said. “If you are a company that is located close to transit, you have a much higher likelihood that your employees can live elsewhere and still have access.”

Watt Cos. is working on a 400-unit joint development with L.A. County and Metro at the Expo/Crenshaw Station and has completely renovated 3401 Exposition Blvd., 1205 Colorado Ave. and 1550 Euclid St., all near the Expo Line.

The group is developing both office and multi-family housing along the line.

“If you only have one product type on the rail, it sort of defeats the purpose,” McElyea said.

Near USC, Architects Orange Inc. is working on The Fig, a project with 180 multifamily units, 222 student housing units and a 298-room hotel with ground floor retail.

“The Expo Line is important; it’s fairly close to the site,” said Bruce Greenfield, a principal at Architects Orange. “Being able to access the Expo Line and get to other areas is important.”

The site is also close to the Coliseum, the new Los Angeles Football Club stadium and the upcoming Lucas Museum of Narrative Art, which Greenfield said was also important.

Marques Williams, a director at Cushman & Wakefield Inc., said the development between downtown and Santa Monica is a natural progression.

“There is really nowhere else to go. Downtown L.A. is getting to the point where there’s really no more land to develop and the same with Santa Monica where it’s really hard to develop,” Williams said.

Culver City, too, has seen a lot of development.

McElyea said Watt Cos. bought a property at 3000 S. Robertson Blvd. in Culver City years ago knowing the line would go through and connect the area to downtown, “but we never could have predicted the boom that actually happened.”

Williams said there’s not a lot of availability now.

One of the areas seeing a major uptick in development driven by the Expo Line is West Adams.

Watt Cos. is also working on projects in the area. “We focus on trying to find locations where existing markets are converging with others,” McElyea said. “That was our thesis behind making the investment in Crenshaw. We saw Culver City expanding east and downtown, and USC expanding west.”

Carmel Partners Inc. is working on the Cumulus, a 30-story tower with 100,000 square feet of retail and 1,210 apartments. Muhlstein called the Cumulus “the poster child” for development near the Expo Line.

Residential projects are leading development along the line, followed by creative office and new office product, then retail.

David Pourbaba, founder and chief executive of 4D Development & Investments, is working on E. on Adams at 5181 W. Adams Blvd. The $40 million project will have 115 apartments, 11% of which are affordable housing units, and 17,000 square feet of retail.