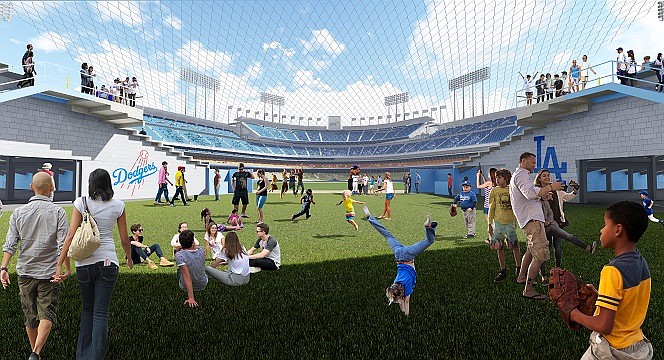 A rendering of planned renovations to Dodger Stadium.

The Los Angeles Dodgers will spend $100 million in private financing to renovate Dodger Stadium, adding a new plaza adjacent to center field among other improvements.

In a press conference Tuesday, team President Stan Kasten said the new plaza will feature restaurants, a beer garden and a kid’s play area, as well as elevators and bridges to connect the plaza to the rest of the stadium. Statues of Dodger luminaries Jackie Robinson and Sandy Koufax will stand outside the plaza.

The renovations will also include structural improvements to modernize a 57-year-old stadium, the third oldest in Major League Baseball.

In remarks at the event, Garcetti highlighted the fact that the recent slate of stadium improvements have been funded privately. “Without any taxpayer money, north of $300 million has been put into the stadium,” Garcetti said, referring to renovations that began in 2013 shortly after the current ownership group purchased the team for $2.2 billion from Frank McCourt.

She declined to say what corporate sponsors the Dodgers were in negotiations with to help finance the stadium renovation.

Negotiations with corporate sponsors could alter design plans, Kasten said. The refurbishments are slated to be complete prior to the 2020 season when Dodger Stadium will play host to Major League Baseball's All-Star Game. Most of the renovation work will be undertaken after the Dodgers’ 2019 season ends.