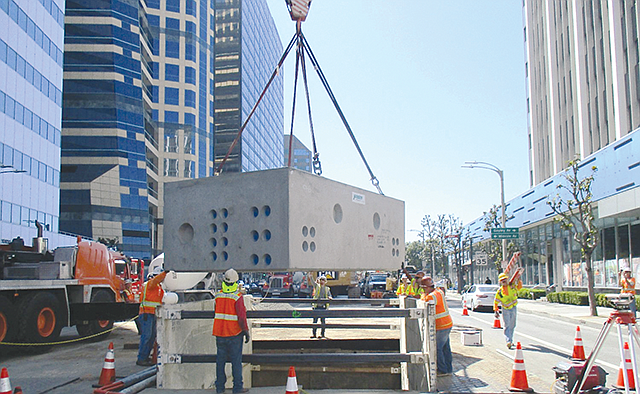 Federal transportation officials on July 9 announced a $100 million grant for construction of the third segment of the Metro Purple Line subway connecting Century City with Westwood.

The grant is the second $100 million allocation from the Federal Transit Administration for this Westwood segment, which is projected to cost $3.6 billion. The Los Angeles County Metropolitan Transportation Authority said in announcing the grant that it has requested a total of $1.3 billion in funds from the FTA.

The third and final section of the Purple Line Extension will span 2.6 miles between Century City and the Westwood/Veterans Administration Hospital complex and will include two new stations — one at the intersection of Wilshire and Westwood boulevards and the other on the VA grounds just west of the 405 Freeway.

In May, Metro awarded a $1.4 billion contract to a joint venture between Sylmar-based Tutor Perini Corp. and Torrington, Conn.-based O&G Industries Inc. The same joint venture is also building the second phase through Beverly Hills and Century City.

Section Three has already begun some construction activities, which include utility relocation work and preconstruction. The entire 9-mile Purple Line extension is scheduled to open by 2027, in time for the 2028 Summer Olympic and Paralympic Games in Los Angeles.

“This is critical funding for a long-awaited section that will help reduce traffic times, alleviate congestion and connect commuters from downtown Los Angeles to the Westside,” Sen. Dianne Feinstein, who assisted in securing the grant, said in a statement.