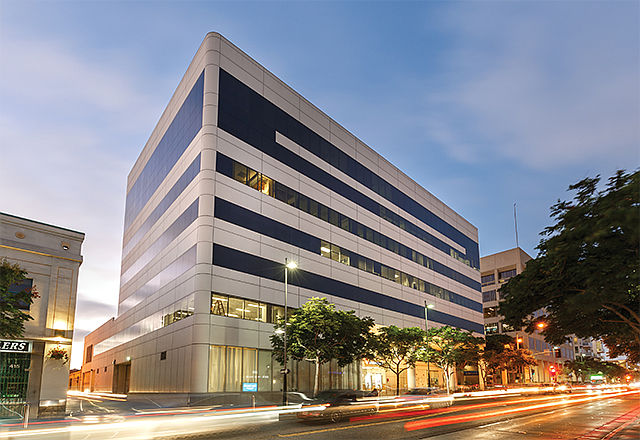 Clustering on the Westside: Knotel signed a lease at 429 Santa Monica Blvd. in February.

Flexible office companies are expanding their footprint in Los Angeles with providers like New York-based Knotel Inc. gobbling up space in the region’s hottest submarkets.

And several coworking companies have partnered directly with building owners to develop portions of their properties for shorter-term tenants.

Since entering the L.A. market this year, Knotel has signed leases at nine buildings. The first announced lease, in Santa Monica at 429 Santa Monica Blvd., was followed by leases in Marina del Rey, Culver City, Westwood, Venice and Beverly Hills. Together, they cover roughly 100,000 square feet — all on the Westside.

“We cluster in one location in a particular submarket,” said Eugene Lee, Knotel’s chief investment officer and global head of real estate.

Lee said Knotel plans to add 10 more locations in that same area this year, growing to 250,000 square feet. “We will be a large player on the Westside before we look at other locations,” he said.

It’s clear why Knotel chose that particular submarket. The average asking rent for Class A office properties on the Westside during the first quarter of 2019 was $5.25 a square foot, compared to $3.89 countywide, according to data from Jones Lang LaSalle Inc. Asking rents in the Santa Monica submarket were the highest in the county at $6.69 a square foot, up $0.53 year over year.

Knotel leases or subleases the majority of its spaces from landlords — including all of its L.A. footprint. The company specializes in offering flexible terms for large and growing clients — a slightly different offering from coworking providers, which tend to work with smaller companies.

“Without a big footprint, we can’t give companies flexibility,” Lee said. “Our model requires scale.”

Many large landlords see the flexibility offered by Knotel and coworking providers like Industrious, Village Workspaces and WeWork Cos. Inc. as an amenity they want to offer at their properties. Some, like New York-based Tishman Speyer Properties, are running their own coworking floors at their properties. In May, Tishman opened Studio in Beverly Hills, a 36,000-square-foot coworking floor at its property at 407 N. Maple Drive.