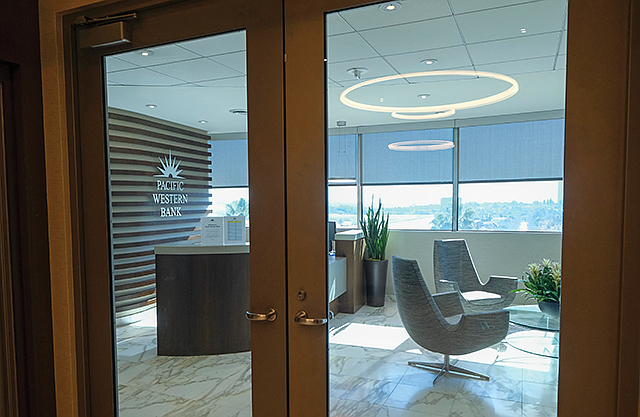 Room for Growth: PacWest’s deal for El Dorado Savings fell through, but firm is still in acquisition mode. Photo by Ringo Chiu.

Beverly Hills-based PacWest Bancorp has cobbled together 29 acquisitions over the last two decades to make its Pacific Western Bank unit the second largest independent bank in the L.A. region with more than $25 billion in assets.

Acquisition No. 30, however, has proved a stumbling block for the firm.

The proposed purchase in September of Placerville-based El Dorado Savings Bank for $466.7 million in stock and cash fell apart over the last four months, leading to the deal’s cancellation Jan. 9.

“It was very disappointing. It was just unfortunate,” said John Eggemeyer, chairman of PacWest since its formation in 2000.

A major reason behind the deal’s collapse was the performance of PacWest’s stock, which dropped precipitously in the fourth quarter of 2018 along with much of the stock market.

Because a substantial portion of the El Dorado Savings acquisition was made up of PacWest stock, the deal value plummeted, too: By the time PacWest terminated the deal earlier this month, according to deal terms provided by the bank, the price tag of the proposed acquisition had shrunk by more than a quarter of its original value to $349.43 million. At one point, on Christmas Eve, the value of the deal had fallen to $313.16 million, down 32.9 percent from when the transaction was announced in September.

With a sizeable chuck of the deal value erased, the sellers didn’t see much sense in selling their bank, and El Dorado Savings shareholders failed to ratify the transaction in a vote at a special meeting Jan. 9.

There could be another bid by PacWest for the NorCal bank, but both sides said that wasn’t likely to happen in the immediate future.

“In order to stabilize things here, we are not looking to do a deal right away,” El Dorado Savings Chairman Thomas Meuser said in an interview. “We have to keep things going forward as an independent bank. We told the employees that we are not soliciting or encouraging any offers.

“We are sorry it failed. We wanted it to go through.”

“I was going to give the analogy of a girlfriend who you might go back with in time. But it’s hard to know. It’s hard to go backwards,” Eggemeyer said.

“I think PacWest feels the board and management at El Dorado were incredibly honorable. That’s not the issue but whether you can have a sense of comfort to get the vote in the future,” he said. “I think right now, it’s best for everybody to let the dust settle for a while.

Some bank analysts who follow PacWest see management making a run at either El Dorado again – which would give the bank a beachhead in Northern California to build out through more acquisitions – or perhaps pursue other privately held banks to achieve its expansion plans.

“They may have another bite at the apple,” said David Chiaverini, a senior bank analyst with downtown-based Wedbush Securities Inc. “Mid-year may be too soon for that to occur, but they may have to let nine or 12 months pass, or let more time go by to attempt buying it again.”

The valuation drop was the primary reason for the El Dorado deal’s termination, he said.

“It was probably a bit of sticker shock in how much the valuation had fallen from the time of the announcement to the (shareholder) vote,” Chiaverini said.

Despite the stock falling about 20 percent to $38.88 as of Jan. 22, from its Sept. 12 price of $48.26 when the El Dorado deal was announced, Chiaverini continues to see PacWest’s acquisition appetite as insatiable.

Michael Young, vice president of financial institutions equity research for Atlanta-based SunTrust Robinson Humphrey Inc., said other regional suitors remain interested in El Dorado, so the opportunity to purchase the bank may slip through their fingers.

Still, Young said, it’s reasonable to believe PacWest may want to revisit the acquisition, but perhaps structure it differently with caps on the minimum and maximum payout to the seller.

“This one did not have that,” said Young of PacWest’s terminated deal with El Dorado. “There’s no rush to do this today. They could always come back to it.”

The El Dorado Savings deal failure was the first time PacWest had pulled the plug on an acquisition – and Eggemeyer, who has been involved in more than 75 bank acquisitions in his career and who also serves as founder and managing principal of private equity firm Castle Creek Capital in Rancho Santa Fe, blamed larger market forces for the derailed deal.

“The drop in valuation didn’t make the deal work,” said Eggemeyer, who wondered more broadly why so many bank stocks collapsed in valuation beginning in October.

“The very best in the bank universe, their stocks got crushed,” he said. “It wasn’t based on anything in particular to a company. Maybe you could argue that dark clouds were forming on the economy, but why were some banks hit so much harder than poorer-valued competitors?”

He suggested that a huge liquidation by hedge funds in the midst of rebalancing their portfolios of billions of dollars in holdings, could have been to blame.

The acquisition would have added 30 El Dorado branches in Northern California and five in Nevada to PacWest’s current roster of 74 branches, most of which are in the SoCal region.

Chiaverini sees PacWest boosting its stock repurchase program, which it delayed in the three months ended Dec. 31 on account of the pending El Dorado deal. In the first three quarters of 2018, PacWest repurchased 5.9 million shares at $52 per share, for a total of $306 million.

The company currently is authorized to purchase an additional $110 million worth of shares but may seek authorization to spend significantly more as a way to bolster its sagging stock price. “I wouldn’t be surprised to have an authorization of an additional $350 million,” Chiaverini said.

Christopher McGratty, banking analyst with New York City-based Keefe Bruyette & Woods Inc., sees PacWest shares as “volatile” in recent months but believes the bank’s board will seek authorization to repurchase $150 million at its February board of directors meeting. He cited recent weakness in the stock price and termination of the El Dorado deal as factors.

“I think discussions are continuing with people,” he said. “There is always a desire on the part of every bank to grow through acquisition. I don’t see that diminishing.”