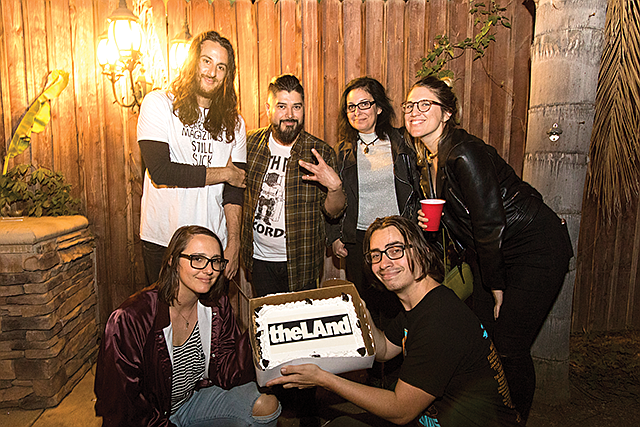 The first month of 2019 has ushered in yet more change for LA Weekly.

Los Angeles’ flagship alternative news publication has chopped its content and distribution as it moves to resolve a lawsuit between the newspaper’s owners and faces a new competitor − theLAnd Magazine.

TheLAnd is co-founded by Jeff Weiss, who was a columnist for the Weekly. Weiss helped engineer a boycott of the Weekly among some journalists and advertisers, after Voice Media Group sold the publication to a band of mostly Orange County investors.

The new owners opted not to retain 9 of the Weekly’s 13 editorial staff members after acquiring the publication in November 2017 under the official name, Street Media. The move helped kick off protests against the new ownership group and, according to Weiss, led to a new publication.

“TheLAnd started explicitly from the boycott,” Weiss said. “At a certain point, we didn’t want to be entirely negative.”

Alternative publications all over the United States are struggling financially, but the Weekly perhaps stands out.

“The situation at LA Weekly is unique and is largely self-inflicted,” said Jason Zaragoza, executive director of the Association of Alternative Newsmedia, whose member publications include the Weekly.

LA Weekly publisher and part owner Brian Calle did not respond to requests for comment.

The Weekly in 2018 moved offices from Culver City to downtown, canceled a money-making slate of events, and produced a paper slimmer in advertising and editorial content.

The paper has shrunk further recently, dropping from 39 pages in its November and December editions to 22 pages in the Jan. 18 edition, a 44 percent decline over the first three weeks of 2019.

The Weekly’s distribution network has also shrunk. The newspaper decided not to pay the annual fee needed to distribute its product in news racks that already display the Weekly’s logo, according to information provided by the Los Angeles Department of Public Works.

The Weekly has about 350 news racks across Los Angeles, Paul Gomez, a Public Works spokesman, said in an email, and renewal would have cost $21.69 per rack or about $7,600 total.

The Weekly must take down its news racks, or the city will impound them, Gomez added.

Co-owner David Welch sued Calle and the Weekly’s other investors in August for breach of fiduciary duty.

Both sides requested earlier this month to postpone hearings in the case until May as they conduct settlement talks before a private mediator.

Welch, a downtown lawyer, invested $225,000 into the Weekly, or 12 percent of the $1.875 million total that nine Street Media investors put into the publication, according to a company operating agreement the Business Journal obtained.

Welch’s lawsuit focuses on the dealings of Calle, who put $300,000 into the publication and has since also invested in a different alternative publication, the Irvine Weekly.

The largest Weekly investor is Kevin Xu, a bioscience executive who put $525,000 into the Weekly, and is listed in Welch’s lawsuit as a co-defendant.

Former Weekly writers, and advertisers, have resurfaced at theLAnd Magazine.

TheLAnd plans to release its first issue Feb. 9, Weiss said, a 112-page edition that will be distributed for free. For those worried they might not be able to find an issue – the initial print edition will have a run of 15,000 – a $20 preorder reserves a copy.

Weiss said theLAnd may ultimately become a quarterly print publication and that the outlet plans to publish stories online as well.

“Gentrification is a major theme of the first issue,” Weiss said, and the publication will contain editorial elements of the old Weekly, such as a Henry Rollins column.

In addition to ad buys, theLAnd took financing from Joshuah Bearman, a journalist and founder of digital publication Epic.

Weiss said he plans to independently incorporate theLAnd later this year. The magazine is doing business for now under Beverly Hills-based Pow Records Inc., another business run by Weiss.