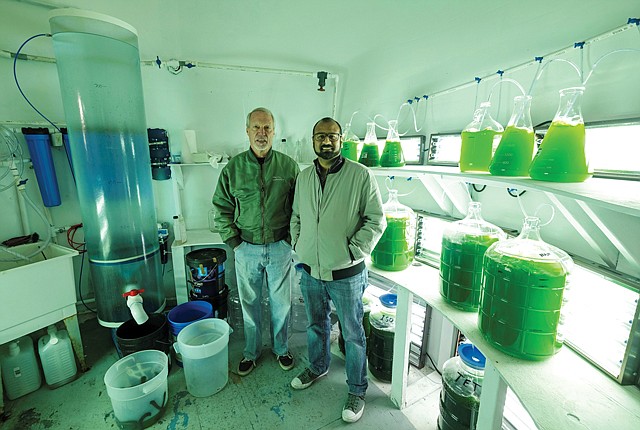 Catalina Sea Ranch hauled in its first crop of Mediterranean mussels in July 2017 off the coast of Los Angeles out of the first aquaculture farm in the nation to be allowed in federal waters.

A year and a half later, the privately held San Pedro-based firm is looking to grow its operation, filing for a permit to expand its 100-acre ocean farm to nearly 3,000 acres this year in order to increase its yield of commercially grown mollusks, giant kelp and other sustainable marine crops.

To develop bigger, better and faster growing mussels, the company also plans this month to launch a spinoff, Syntheseas Inc., which it claims is the first aquaculture biotechnology company in Los Angeles County.

The new corporate offshoot’s goal is to increase aquaculture yields using genomics, genetics and synthetic biology while packing more nutrition and disease resistance into each animal and plant. For Catalina Sea Ranch, the goal is to increase harvests by at least 20 percent each year, but there’s no timeframe for achieving that benchmark.

“The need for 3,000 acres puts a small dent in America’s $15 billion seafood trade deficit,” said Phil Cruver, the nearly 74-year-old founder and chief executive of Catalina Sea Ranch, from his office at Berth 58 at the Port of Los Angeles. “The biotech company, Syntheseas, will allow us to experiment on how to better protect the ocean and feed the future through technology.”

The company said it was profitable but declined to give specific revenue figures.

Catalina Sea Ranch will retain rights to use Syntheseas research first, for which it would pay a yet-to-be determined licensing fee, according to company officials.

Catalina Sea Ranch was founded in 2012 after winning the first permit from the U.S. Army Corp of Engineers to practice aquaculture for commercial use in federal

Federal agencies, including the National Oceanic and Atmospheric Administration’s fisheries division, aim to boost U.S. marine aquaculture by 50 percent by 2020 in order to help close a $15 billion seafood trade deficit.

The mollusks, fed by phytoplankton upwelling from the San Pedro Shelf, are harvested eight months or more after the growing ropes are seeded.

When fully operational, the current aqua farm is capable of producing 2 million pounds a year, Cruver said, with the goal of increasing wholesale prices for locally grown, premium mussels to between $3 and $4 a pound within five years.

To scale up aquaculture production for a $400 billion global seafood market – including a $1 billion mollusk market in the United States – Catalina Sea Ranch has applied for U.S. permission to farm 2,900 acres in 2019. A third would be sectioned off for mussels, a third for kelp and a third for raising caged shellfish such as giant rock scallops, Pacific oysters and abalone.

If approved, Cruver said, a larger sea ranch could produce 20,000,000 pounds of fresh mussels a year, a crop worth $60 million if sold at premium.

“We have a $3 mussel, based on a meat-to-shell ratio,” declared Cruver, staring into salt water baths of various sized mussels chosen for selective breeding inside a cryopreservation lab amid the historic harbor berth. “People will pay premium for being local and traceable from local waters to the plate.”

Company officials said there would be challenges in expanding Catalina Sea Ranch’s operations. Additional vessels, staff, equipment and a more robust crop of creatures will likely be needed to achieve scale. Officials said the company would likely need to raise additional capital to fund the expansion.

While the expansion requirements might be intensive, the market for aquaculture is growing along with the global population, which is estimated to reach 10 billion by 2050, according to company officials.

In order to meet growing demand, a hardier breed of shellfish is required and Catalina Sea Ranch sees biotech and selective breeding as a necessity to achieve that goal. More robust strains of macroalgae and kelp are also needed, officials said, for a global seaweed market expected to grow to $22 billion by 2024 from $10.3 billion in 2015.

Enter Syntheseas, the biotech research firm set to come online this month. It is spearheaded by Catalina Sea Ranch founder Cruver and Tariq Warsi, a genetic scientist currently working for Amgen Inc. The pair met via LinkedIn and discovered they had a shared interest in synthetic biology – the creation of new organisms through genetic engineering.

Someone would eventually get around to bioengineering aquaculture crops, Cruver reasoned, and it might as well be someone at a biotech firm linked to Catalina Sea Ranch.

Warsi, who was a postdoctoral fellow at Harvard Medical School and also served as a staff scientist at Stanford University, has extensive experience in biotech startups such as Aurora Algae Inc., as well as venture capital. He now researches cancer therapies for Amgen, which he intends to leave this month to run Syntheseas.

“It’s a crossroads between synthetic biology, aquaculture and biotechnology,” said

Catalina, which has 20 employees, has raised more than $6 million in private funding, plus more than $1 million in federal government contracts from NOAA, the Energy and Agriculture departments, and other agencies.

Syntheseas expects to raise $3 million in an upcoming seed round, which it plans to use to buy a stake in Catalina Sea Ranch. Once up and running, the company aims to bring in up to five senior scientists from USC, Warsi said.

“I think Syntheseas is a great example of how we can innovate anything in L.A., and that we have enormous resources to support diverse R&D here,” said Dina Lozofsky, executive director of Biocom LA, a Los Angeles biotech trade group, in an email. “I believe Syntheseas is the first L.A. biotech to apply precision breeding and new gene editing technologies to improving aquaculture.

On a cool Wednesday morning the day after New Year’s, Cruver and Warsiq set off in a motor boat with a couple of potential venture capital investors from Seventure Partners, who flew from France to inspect the farm.

The year’s first mussel harvest, scheduled for last week, had been put on hold by a federal inspector beached as a result of the government shutdown.

A dolphin leaped through rubber buoys floating amid unseen mussels clinging to thousands of feet of line beneath the waves. Further offshore were the mussel-encrusted oil platforms that gave a scuba diving Cruver his Eureka idea for an aqua farm.

Now, it would be up to biotech to take it one step further.

“The scale of this is incredible,” Warsi said, surveilling an open sea packed with the key ingredient for French dish moules marinieres, or sailor-style mussels. “The ability to grow these animals out here, and our ability to engineer them. This is 100 acres – but we’re talking 3,000 acres, the scale which is almost infinite.”