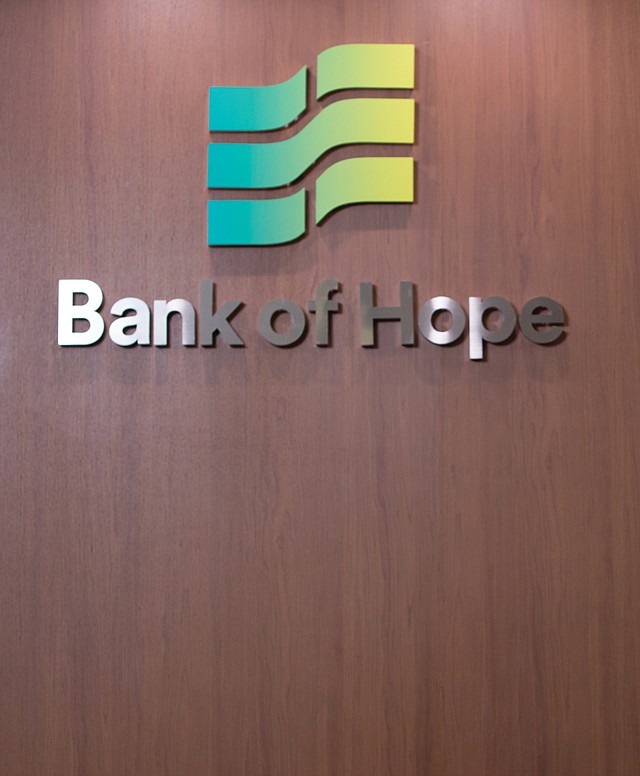 A New Hope?: Bank to close 10 percent of branches

Koreatown-based Hope Bancorp Inc. plans to close nearly 10 percent of its branches over a swath of its nine-state territory in January as well as temporarily end the sale of its small business loans into a secondary market.

The moves are part of its broader effort to improve profitability.

“We view the branch announcement as a modest positive with an earn-back under one year,” McGratty said. As for the shift in strategy on small-business lending, McGratty said the move will be “modestly dilutive to near-term earnings” with the reduction in quarterly volatility from the fee income derived from the U.S. Small Business Administration guaranteed loans as a “positive.”

The bank’s strategic moves are part of the institution’s wider plan to cut costs and reduce expenses following its July 2016 formation through a merger of BBCN Bank and Wilshire Bank. Hope Bancorp currently has approximately $15.2 billion in assets.

Angie Yang, senior vice president and director of investor relations for Hope Bancorp, the parent of the Bank of Hope, said that up to six of the bank’s 63 branches would be shuttered as early as this month.

The layoffs in connection with the branch closings are “not significant” but could affect from four to 10 employees at each branch though many may be shifted to other branches in close proximity as part of an efficiency move, Yang explained.

The company anticipates incurring a one-time pretax charge of about $1.7 million in the fourth quarter ended Dec. 31 in connection with the “branch rationalization plan,” she said.

Projected savings are expected to be $1.9 million on a pretax, annual basis with the initial benefits being recognized beginning in the second quarter, starting April 1.

Manhattan Beach-based registered investment advisory firm TriLinc Global, which has roughly $500 million in assets under management, said one of its three funds has provided $7 million in financing to a mobile-phone distributor operating in Southeast Asia.

“TriLinc has extended over $50 million in financing to the mobile phone distributor since July 2017 in order to support the company in scaling its distribution network in the Indian market,” said TriLinc Chief Executive Gloria Nelund.

The Hong Kong-based mobile phone distributor, which was not identified, specializes in the trading and distribution of mobile phones, cameras, music players and home appliances.

The TriLinc Global Impact Fund, which provided the $7 million in financing to the mobile-phone distributor, regularly makes public disclosures on its investments with U.S. Securities and Exchange Commission filings.

Microsoft Corp. co-founder Paul Allen, who passed away in October, invested in the TriLinc Global Sustainable Income Fund in 2017 through his Seattle-based private investment firm Vulcan Inc., according to Nelund.

The acquisition includes two wind farms in the western region of ERCOT, or the Electric Reliability Council of Texas, that manages the flow of electricity on Texas’ electrical grid, and one wind farm in the northern ERCOT region.