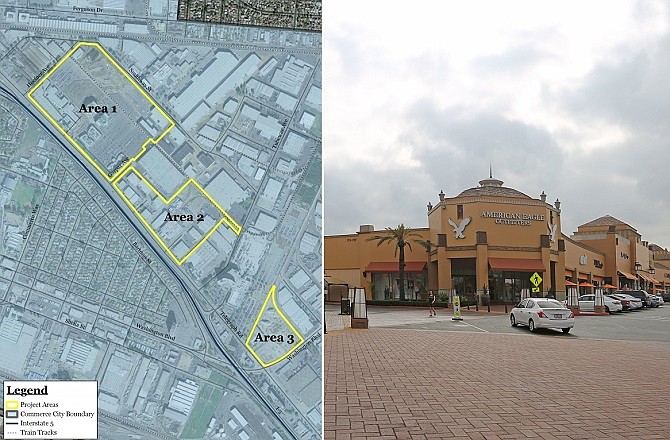 The City of Commerce's draft environmental impact report map (pictured left) for the Citadel Outlets (pictured right). The center's existing footprint and parking lots are indicated as Area 1 on the map.

Newport Beach-based Craig Realty Group, which owns the Citadel Outlets in Commerce, is planning a 10-acre expansion that will include retail, hotels and a monorail system.

Area 2 will have roughly 70,000 square feet of traditional retail space, a 120,000-square-foot building for “Adventure Experiential Retail” and a 150,000-square-foot entertainment complex which will include a movie theater. The site will also have a 500-room hotel with parking for 700 cars. The site would open in stages from 2023 to 2026.

The sites will be linked with a monorail system, which would open in late 2023 or early 2024. It needs approval from the National Transportation Safety Board.

Area 3 will have restaurants and a 55,000-square-foot industrial building. It is expected to be completed in 2020.

The Citadel Outlets expansion is just one of several ambitious retail development plans in L.A. Santa Monica-based Macerich Co. and Simon Property Group Inc. are developing an outlet mall in Carson. The Los Angeles Premium Outlets will be 566,000 square feet. It is expected to open in fall 2021.