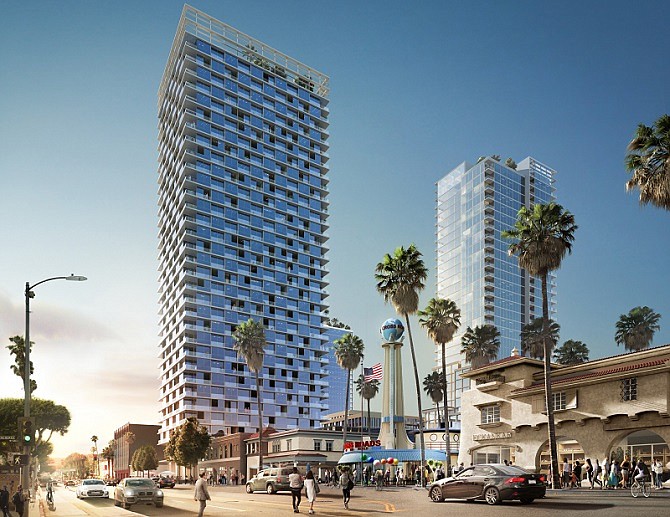 The AIDS Healthcare Foundation and Livable LA have filed a suit against the City of Los Angeles and the Community Redevelopment Agency of Los Angeles over the Crossroads Hollywood project approval.

The $1 billion Crossroads Hollywood project being developed by Harridge Development Group was approved by the city council Jan. 22.

Once completed, it will have 950 units of housing, including 105 very low-income units, more than 300 hotel rooms and 190,000 square feet of commercial space.

The lawsuit, filed in L.A. Superior Court, alleges that the city violated several laws to fast-track the approval of the project. The city is accused of violating California Environmental Quality Act, Community Redevelopment Law, Planning and Zoning Law and Los Angeles Municipal Code.

The suit is asking to halt or delay the project.

“As a corruption scandal roils City Hall and the FBI investigates what appears to be a business as usual, ‘pay-to-play’ culture involving deep-pocketed property developers and some individuals in city government, including, it appears, some City Councilmembers, we filed this legal action seeking a writ of mandate to revisit the fast track approval of the redevelopment of Crossroads of the World in Hollywood,” said Michael Weinstein, president of AHF, in a statement. “We believe that the city and the Community Redevelopment Agency of Los Angeles have shown deliberate indifference to the serious negative impacts and resulting gentrification that this enormous luxury project will have in Hollywood and along Sunset Boulevard.”

The AIDS Healthcare Foundation claims the project would increase traffic, destroy a community with rent-controlled apartments and destroy historic resources.

Proponents of the project have argued that it would create jobs and much needed housing.

“There are a couple of folks in the Hollywood submarket that have used litigation to stay and stymie several projects,” UCLA Anderson School of Management professor Eric Sussman said.

Sussman added that efforts to stop and curtail projects is not new but has been very visible in Hollywood because of groups like the AIDS Healthcare Foundation that “actively use the courts.”

This is not the first time the AIDS Healthcare Foundation has become involved in California real estate. The company contributed $20 million to campaign for Proposition 10 in 2018. The initiative, which ultimately failed, sought to expand rent control.

“The Crossroads Hollywood team fully believes the project will move forward swiftly irrespective of the lawsuit, given its status as a California Environmental Leadership Development Project,” developer representative Kyndra Casper said in a statement. “As we are confident that we will prevail on the merits, we will continue working with the community in bringing Hollywood this exciting and transformational project.”

Sussman, though, said the suit “could significantly delay the project” but it would greatly depend on the judge.

A completion date for the project has not yet been announced. In January, David Schwartzman, president and chief executive of Harridge Development Group, told the Business Journal that he was looking to start construction in the next 12 months. After that, it would take 48 to 60 months to complete.